Hasbro: It's a summer destination too!

We never did make it to the beach last week.

The next morning, the Doodle Bop woke up with blood sugar issues (from dropping weight earlier in the week I am sure) that I had not seen in over two years with him. Then? He started breaking out like crazy. We could only use the Benadryl every six hours, but less than four would go by and he would be all blotchy. I called the pediatrician and spoke with the nurse. They said I could not under any circumstances give him more Benadryl before the six hours was up and assured me he would be fine. 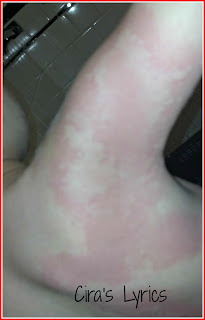 And this. And crying that he was oh so itchy. As time went on, I started to panic. 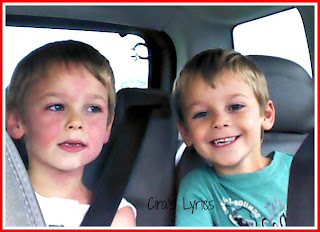 I took the boys to Al's office because the Doodle Bop was missing Daddy. When I got there, Danielle called me to come over so she could take a look at him. Once she saw him, she agreed he should go to the hospital. These photos don't even really do what he looked like justice. She and her husband kept my other two guys and off to Hasbro the Doodle Bop and I went. 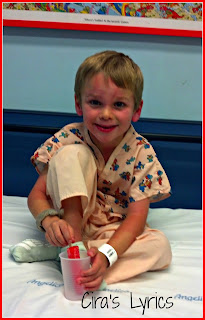 Everyone was so nice. They got us in immediately upon seeing him. I was showing everyone I could some of the photos I had taken of him as the week went along. I do document so many things with the boys, but not usually stages of sickness. Something about this time though, made me feel like I needed to keep photos of what I was seeing. Something felt so... off. Yes we had been to the doctor's office twice and I had called in on the other days ... but something made me store photos here and there on my cell.

The first doctor didn't seem very concerned, she told me the same thing my pedi's office had. It was the second doctor who finally put me at ease. I hear you have some pictures, he said ... and he asked me some questions before he took a look at them. As I answered, he was telling the intern with him it sounded like a classic case. He needed to see the photos to be sure.

I showed him what his throat had looked like, along with the progression of the splotches.

Yes, the other doctor's had all been right - the irritation he was having now was an overactive auto immune response to his body trying to fight off the germs. But what everyone else missed? Was that it started with Coxsackie. In his throat only.

Because of course. Because the Doodle Bop always has his two fingers in his mouth...which is how he got hand foot and mouth when he was two. I am always warning this child he is going to get sick from picking up germs like that.

While it would not have changed anything medically, had we known about the Coxsackie, I never would have exposed him to other kids that morning when we thought he was no longer contagious. I couldn't help feeling mad. How did 3 other doctors miss what another could tell just by looking at some cell phone photos (photos that 2 of those 3 doctors saw in person).

More Benadryl, a Popsicle and a few hours later, we were sent home with a script for something similar to Benadryl but stronger. And a warning that he would still be considered contagious till Monday. It was awful having to give up taking everyone to Boston on Saturday to see some old friends from college. We sent Al to represent the family and spent the day on the couch.

Today is the 9th day since the Doodle Bop got sick. The Big Guy fought off what I think was the start of the same thing, the Bunny Bee never got it. Tomorrow we can go back to our old routine. Tuesday means swim lessons, then wrestling practice. While I cancelled all appointments through today, I decided we were close enough and the boys had been stuck inside enough.

We took off to the beach for a few hours. 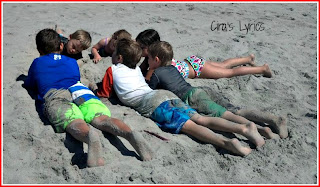 They were all pretty low key today, but the water was cold and I think they were still moving a little slow from being home for so long. They actually asked to leave the beach. Usually it's me trying to drag three boys out who do.not.want.to.leave.yet.Mommy!

I think we will head back again tomorrow. For however long they want to stay - but not all day - because we have swim and wrestling to get back to. I think it will be good for them. No matter how sick they were over the last week, it never fully stopped them from randomly practicing wrestling and gymnastics moves.

I am so looking forward to being back in the swing of our normal routine, as busy as it is. I feel like I need to soak up every last bit of summer over the next few weeks.