Saying goodbye to an old friend

I have half a dozen unfinished posts right now.

I had been working on a few when the news came last week. Heather IM'd me and told me that I needed to sit down, she would be calling me soon. I could not understand what was going on. When she called, it was to tell me that an old friend had been killed in an accident the night before. An accident that I had seen on the news the night before, just hours after it had happened. I told her she was wrong ... that the news report said the person was older ... it wasn't her. It wasn't possible.

How often does the news get the details right in their rush to report anyway. As she kept talking, I went from denial to hysterical tears I was not prepared for. When we got off the phone I could barely get the words out when I called Al. The very accident we saw on the news before we went to sleep the night before? The hit and run? How could this be.

It has been just about a week and I still can't wrap my head around this. Kerri and I go back to 4th grade maybe? She lived in the neighborhood but went to a different school. Her mom put her in the Girl Scout troop that met at our elementary school so she could meet the girls that lived around her. And we hit it off right away. We had Girl Scouts, camping trips, her parents took me so many places with them. Sleepovers at her house - with her younger sister sometimes included. She got me addicted to Pink Country Time lemonade with added sugar. That's right, she added sugar to it. And for some reason she was always making hot dogs and cut up potatoes fried in a pan ... which we then put ketchup and salt on. I ate that for years and loved it. It makes me shudder now that we once thought that was so good.

Junior High and High School was difficult for us at times. I can't gloss over that. Frenemies may not have been a term then, but if it was we might very well have been the poster girls for it. We bounced back and forth between best friends and not speaking at all. For years.

In Junior High, we had Park View Chorus to always pull us back together. Competitions, trips, not to mention the constant practices. In High School, it was field hockey. (And for awhile Papa Gino's too ... so many of us worked there.) No matter where we fell apart during the year, we had to get back on the same page during field hockey season ... or for a work shift. It was just the way it was.

But after graduation? We spent years not talking. Around the time we were both having our first child she reached out to me in an email. We talked about so many things. And it was really nice. We were no longer close like we were when we were younger, but we could also let all the old crap go. None of it mattered anymore. I ran into her once at the city pool one year when our kids were smaller. My boys splashed around with her daughter a little. Aside from that, we just chit chatted on Facebook. Random things ... about our kids, day to day stuff ... but so nice to keep in touch. She gave me tips on C25K when I was starting and not at all loving it, as she was finishing.

Not that you ever know how you will react to something, I could never have imagined how I would react to ... this. I am so angry. Angry that someone could hit her and leave her in the street. Angry that this guy gets away without a DUI because he hid out long enough before turning himself in. Devastated for her daughter - who is the same age as my son - who will now have to grow up without her mom. It is so unfair.

This entire last week has been surreal. So many of us connected somehow. For a few days it felt like my cell phone didn't stop ringing and my Facebook inbox was always full of messages. In a way I can't explain, it brought so many of us back together and it didn't matter how many years had passed. Old photos and memories have been shared. Things that I had forgotten long ago.

Monday night Heather got a few of us together. Last night was the wake. I thought I could do it but as the day went on ... I had a feeling it would be harder than I thought. I came across an old arrow head I think she called it, more like this really thin brown rock that she had brought me back from Oregon one year. For a reason I can't explain I threw it in my pocketbook last night.

I was already holding back the tears when we walked into the wake and started to see old classmates. The moment I looked around while standing in line and noticed her daughter, I lost it. And then again talking to her husband, parents and siblings.

I told Becca I would go to the funeral with her this morning ... but I was such a mess last night I went to bed with a headache I didn't do anything about and woke up with a migraine. I just couldn't do it. I am not winning any mother of the year awards this week with my kids and I'm pretty sure my husband is keeping quiet because he doesn't even know what to say.

How can someone who was such a part of my childhood ... who I just talked to a little over a week ago ... just not be here anymore. I had an anxiety attack I tried had to quell on Halloween, walking the boys around in the dark with cars everywhere. I was suddenly terrified someone was going to hit us. None of this makes sense.

Tonight, Kerri's friends and family will gather at Twin Oaks to share their memories of her. It doesn't matter if you were still close now, or if it was years ago. Heather organized it and anyone who wants to attend is welcome.

Today, I am thankful that over the last few years, we were able to let all of the old dramas of our past go ... and that we could move on as adults and find our way back to being friends. I will truly miss her. 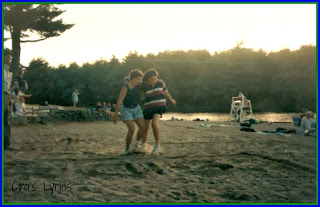