You might not know it now from the way the boys are lying on the livingroom couch and floor glued to Ni Hao, Kai-Lan but this whole day has been nothing but chaos.  Scratch that, we've been at nothing but chaos since like 2 weeks before Christmas.  And I have no.idea.why.  But I have been holding back the tears all day.

I have good days with the kids, bad days with the kids, and those days that fall somewhere in the middle.  Lately, it makes me sad to say nearly every day could be classified as a bad day.  In the 2 weeks till Christmas, I chalked it up to the Big Guy turning 5 and everyone's pending excitement of Santa.  The first few days after?  The sensory overload.  Another week after that?  I don't know how I got here or who substituted my real kids with these pod kids behind my back.

Have you seen me out in the last week?  Or maybe at the post office today?  Looking years older than I feel, totally not put together (at all) and trying to wrangle the 3 out of control boys near me (sort of) who seem to be doing the Opposite of whatever I say?

Sickie McSickensick (aka my husband) is home with pnemonia and I am at my wits end.  The poor guy is exhausted ... and when he doesn't hear the kids screaming he gets to listen to me screaming At them.  The boys have broken more toys then I can count this week.  Time outs, threatening to take away the new toys, no tv ... nothing matters to them.  No consequence seems to be big enough.

I actually thought they would behave a little better with Daddy being home sick and all - out of concern at least - but no, we've gone the other way.  Take today for example.  I think today's count is at 3 broken toys (so far).  Sickie McSickensick was napping (or trying to) and I took the boys to the post office with me where they all promised to stay with me, not touch a thing and behave.

Spoiler alert: they ran around like crazy people, two of them put their hands in the trash receptacle and they proceeded to yell at the flat postal worker (cutout).  I?  Was that lady yelling at my kids in line - while they laughed at me.  Oh yeah.

Upon leaving I read them the full riot act in the truck, threatened to empty their rooms out from all their new toys if they couldn't behave.  The Big Guy?  Fearless now that he's five?  That kid yelled back that he didn't Think so and he and the boys would just 'move to Nonno & Lita's house then!'

I drove to Dunkin Donuts to get myself a coffee (since noon is apparently too early to start drinking wine) and to pick up a bagel Sickie McSickensick asked for, and the Big Guy gets all excited yelling 'Yaaay!  Donuts!'  When I let him know he would not be getting one he screamed and cried to the point where it was pointless trying to give my coffee order (3x) because in the end it was wrong anyway.  And do you know upon being handed my coffee the girl at the drivethru proceeded to hold my change hostage while asking why the Big Guy was crying.  When I said I wouldn't let him have a donut she made a pouty face and asked me why.

She asked me WHY!

I explained (as if it was her business) that he had not been good and I was not buying him a donut.  She then said (are you ready for this?) 'Well what if you don't buy one, what if I give it to him'.    I resisted the urge to throw my iced coffee on her and figured she must not have kids and was just trying to be nice.  I politely said 'Thank you but no, I have 3 kids-' and she cut me off and told me she didn't care.

I would have been livid had I not felt like I must have been dreaming this - as my child screamed and hysterically cried from his booster seat.  I gave her a look and said 'Thank you but no, they have not been good and they are not getting donuts'.  Cut to my shocked face as she's finally handing me my change and saying that's why she only has 1 kid, because she can't say no and gives in to anything.

We get home and all three boys are screaming so loud it wakes up Sickie McSickensick.  He helps me get the boys down for naps and goes back to bed.

After naps, the Big Guy shows me his baby doll and his brand new pillow case my mom made him.  Which looked like this: 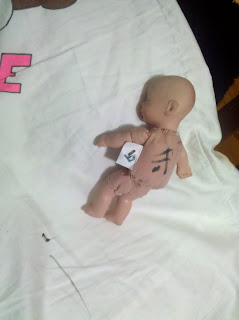 Exhibit A.  Black marker on the pillow case, a dyslexic letter F written on the poor unclothed baby doll's back. 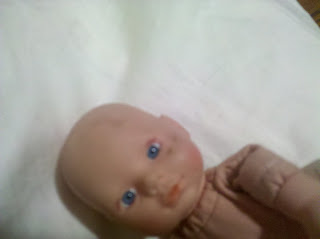 Now, question is what kind of black marker.  Permanent, dry erase, washable?  No idea.  I didn't really keep markers out in reach of the Bunny Bee and the Doodle Bop, but I have given the Big Guy more freedom with them.  I took each kid aside seperately and one after the other they denied it.  Convincingly too.

My money is on the Big Guy or the Bunny Bee.  The Big Guy can write letters (especially F), and sometimes backwards.  The Bunny Bee is working hard on trying to copy whatever he sees and wants so badly to write.  I know it wasn't the Doodle Bop, he's not even close to being there with letters.

Can't get a confession out of ANY of them.

And they stick together, which really amazes me.  Maybe it was a 2 person job, I have no clue.