Cerebral Palsy and Friends of JJ

It's a cause near and dear to my heart because of the Big Guy.  I have told the story so many times by now I felt like I must have written it here, but it doesn't look like I have.  Sure I wrote about how determined he is and lucky we are... but what happened in the beginning?  Surprised that I have not.

From the time the Big Guy was born there was always something I could not put my finger on... something that wasn't the way I thought it should be.  By 12 months old we were already with Early Intervention and seeing various doctors at Hasbro.  I remember feeling aggravated with our pediatrician for sending us to different specialists, though I would later be so grateful she did - she knew there was something too and she was helping us to find out what.

When the Big Guy was just over a year and a half old, we got the diagnosis.  Mild cerebral palsy with hemiplegia on the right side (though now they say hemiperesis on the right side - because he has movement).  The twins were about 6 weeks old.  My husband took the afternoon off work to accompany us to the hospital to see the pediatric orthopedist.  I was convinced the Big Guy needed a corrective shoe and that was why he was barely walking.

What we thought would be a short appointment lasted hours.  He was seen by an intern who thankfully knew right away something was off - and then we waited a long long time - and we were seen by Dr. Craig Eberson.  A Wonderful doctor that I can not say enough good things about.  He was there by chance that day on a rotation but it was not his usual schedule, he had his own office.

My husband and I stood there in disbelief as they explained it was cerebral palsy.  It was the first time I really felt my whole entire world stop.  Like I was watching a movie, because this could not be happening.  We were each holding one of the twins, feeding them a bottle.  I remember just staring at each other, and looking over at the Big Guy who was sitting.  The doctor and the intern spent awhile speaking with us, though I can't tell you really what was said after that point.  One thing I do?  He was left handed almost from day one.  I thought he was advanced.  I had no idea things should not have been that way.  We made arrangements to be seen again in his office.  We contacted EI and got on the list for weekly physical and occupational therapy sessions.

At home that night, after the phone calls and putting the boys in bed.  I remember making myself a mostly tequila margarita and my husband and I just sitting in silence... for a long time.  I don't think either of us knew what to say.  The next day the devastation had kicked in for me.  For my husband though?  Determination that nothing would ever be different.  He has really been my strength through it all.  In the beginning he was at every.single.appointment with me.  MRI, Orthopedist, Neurologist and more... when the Big Guy got fitted for his first AFO before he was two.  He stepped right in with him when I started to get teary and didn't want the Big Guy to see.

We've kept him enrolled in a five mornings a week integrated pre-K program from the moment he turned 3 to keep him in a routine and so he would have extra help from the beginning.  We fought hard and failed to get an IEP for him, even after hiring a parent consultant to fight on our behalf.  The good news is they will not grant it because he is very smart and is keeping up with his classmates.  (I do worry that if we need one down the road he will have to fail something before they deem it necessary.)  He's actually there as a peer model.

It does get hard now that his twin brothers are catching up and sometimes surpassing him in the physical sense.  It's hard to find the right words to explain when he notices and comments on it.  We try to keep everything positive.  Swim lessons since he was 3, this is his 2nd round of soccer.  Anything he wants to do I want him to try.  We even tried to get him to try hockey with the twins but he was not having it last year.

The flip side to all this is the money.  It almost seems like unless you fall behind the poverty line (which we definitely do not) or have a child with very severe needs, you are not going to qualify for any help.  We pay for school weekly.  We pay for each visit to a specialist.  Each time the Big Guy needs a new AFO?  Several hundred dollars out of pocket.  And do not get me started on physical and occupational therapy at $100 a pop (after insurance has covered a portion).  Crazy.

There are so many things I want for him (like a lot more therapy), but it gets hard to keep up with the cost.  In a few years we can look at Botox injections to relax his muscles (something that scares me to think about) and a surgery for his leg to try and lengthen the muscles.  From there I don't know where we will go.  Or how much any of it could cost.

The reason I'm writing about all this, is because there is a foundation being started.  I came into contact with Randy Lutz through writing.  After becoming facebook friends we realized our sons are the same age and both had cerebral palsy.  Randy's son is in a wheelchair.  I can only imagine how much greater the cost of doctors visits and everything else is for them.  He is starting a charitable organization called 'Friends of JJ'.

I've taken the following from the facebook page.  Friends of JJ's goal is to:


Right now Friends of JJ is looking for board members and anyone who can help to get involved.  Even if you can't get involved, I'm asking you as my friends to pass this on to others who may be able to.  Please 'like' the facebook page if you can.  Are you on twitter?  Retweet this out.  Tell people you know about Friends of JJ.  Any help to get this foundation going would be so appreciated.  It would be great if the Big Guy could end up benefiting somehow from this, but even if he doesn't - it will be wonderful to know that other children who are even more affected will benefit from it.

Thanks in advance on behalf of my Big Guy. 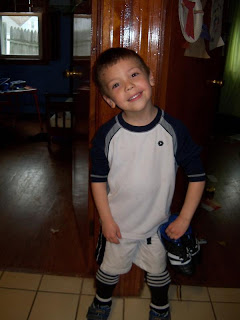