Adventures in babysitting the posse

Today my oldest baby - the Big Guy - is having his End of the Year Show and Pre-K graduation.  Picture me weepy as I blog that one out later.  Thought I'd leave you with this in the meantime.

Yesterday the posse (as they shall now be named) 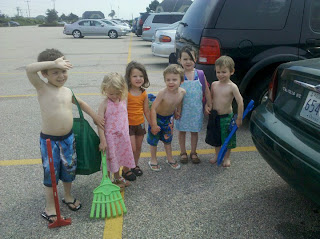 got together.  I was watching the girls in the morning and what a day we all ended up having.  The Bunny Bee decided months ago that he would be marrying -the Big Girl - and they like to hold hands sometimes.  Pretty adorable when they are nearly 4 and 5.  The Big Guy got home from school yesterday and I am still not clear on what happened.  But...well... 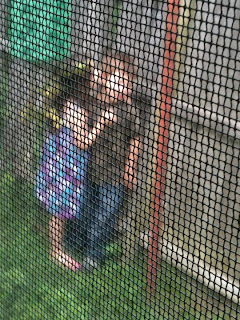 The screen makes it look a little worse but Jules snapped it on the sly as we pretended to not be watching our big ones chat in 'privacy'.  As requested by them.

All hand holding, Bunny Bee left in the dust... they even arranged a date.  See this? 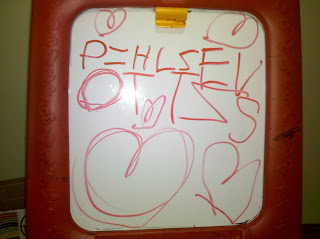 This is the Big Girl's note to the Big Guy that Tuesday (which would be today) is date night and she has instructed her parents to pick them up and take them to Foxwoods so they can have a date.  Which then changed to getting married.

Putting the Big Guy to bed at night he made me promise not to erase the note she left him, and told me how excited he was about their date.  I smiled and reminded him they are both only 5 and no they would not be going out on that date yet.  He looked right at me and said he would be, that the Big Girl was serious and if I would just dial the number (you know, because they don't even know how to use the freaking phone yet!) he would call and talk to her about it.  They are going out.

Oh yeah, and then there is this.  Earlier in the day the posse was sitting down doing crafts.  I was supervising to make sure everyone did OK with the scissors.  I noticed the Doodle Bop's head down as if he was looking towards his feet... but six kids around a small table and I thought he just dropped something.  Then, he looked up.

And I see what's on the floor next to him as he's trying to get something off his face. 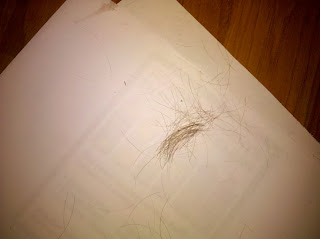 What did you do Doodle Bop? 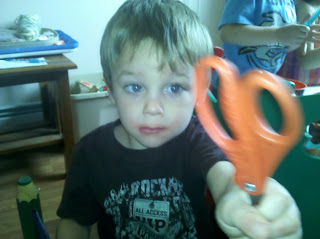 Nothing he swears to me.


Even after I point out the hair on the floor, the scissors in his hand, and the hair stuck on his face from the glue sticks that were also out.  All the kids fall silent and he finally admits it.  He cut his own hair.  Right in front of me.  Because he was 'so excited to give myself a haircut'.  And chopped some of his center bangs right off at the top.  (You know, like I did to my Barbie doll when I was about 8.) 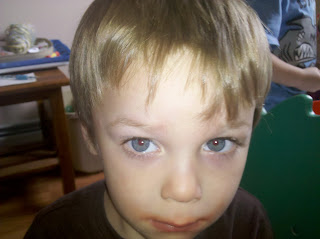 God help me.  It'll all get easier when they get older.

Someone just humor me.
Posted by Liza at 7:56 AM