Aaaaand I'm back to the feast.  Sort of.

Once upon a time (only a summer ago really) I wrote about this boy I loved so much... who was so scared yet so determined.  At the feast we told the boys they could each pick one ride.  Somehow that boy convinced his brothers what they all really wanted to do was go down the giant slide.  Once the twins were deemed not quite tall enough, he was still set on going - even by himself.  I held my breath and said OK, knowing that my husband or I would be walking halfway up there to get him back down when he realized just how high it really was.

The Big Guy didn't even bat an eye.  Handed his ticket over, grabbed a sack to sit on and climbed those stairs slowly.  I didn't breathe till he made it to the top... and then I stopped breathing again.  My husband and I looked at each other and I readied the camera.  There he is on the right. 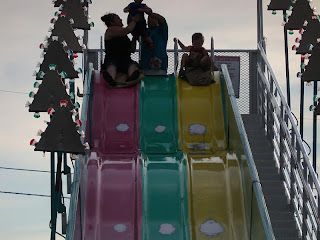 Before I knew it he was sliding down, and so fast.  But he looked happy... 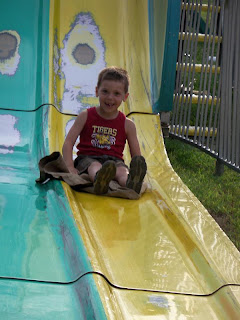 Just as I was snapping that photo he was not quite a quarter of the way down... he started to lurch to the side and I swear I nearly had a heart attack on the spot because it looked like he was going to go over on his head. 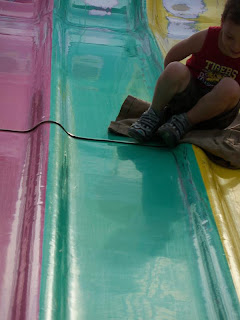 I swear to you I almost lost my mind here.
I don't know how it happened but the Big Guy managed to straighten himself out, avoid another head injury and slide all the way down - without tears. 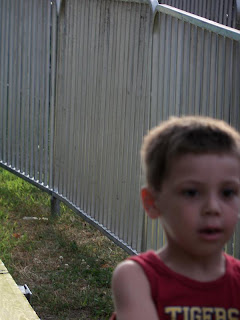 OK, so he looks a little rattled.  But he DID IT!
My baby came over to me while his little brothers cheered, high fived me and said 'See Mom?  I told ya I could do it.  I wasn't even scared.  I'm not afraid of heights anymore!'  My eyes filled up with tears and I could barely speak.  I gave him the biggest hug and just kept telling him how proud I was.
Yesterday we were at his pediatric orthopedist check up, with the wonderful Dr. Eberson who helped us to diagnose the cerebral palsy four years ago.    (Wow.  4 years ago.)  I told the Big Guy he'd be getting fitted for a new AFO.  3 weeks ago he really outgrew his current one and I told him he could have a few weeks off from wearing it till he had his appointment.  While we thought we would go downstairs to be casted again, we got an incredible surprise.
The Big Guy is looking good.  So good in fact we are going to take the rest of the summer off from the AFO on his leg.  The warm weather surely helps his muscles.  If he could have turned a cartwheel in that office I know he would have.  His eyes lit up and he clapped his hands.  I thought he was going  to hug Dr. Eberson for a moment there.  We explained it doesn't mean he doesn't need them anymore, it just means for now we will wait and see what happens.
He's been in an AFO since he was two.  This is amazing news to him.  (For me, a little scary - but that's another post I suppose.)  For now we wait for an important appointment in September and if he's still OK then we re-evaluate again in November.
I can hardly get over the changes in him in one year.  He's only 5 and he's starting to conquer some of his fears.
Posted by Liza at 7:55 AM