Tuesday night Lianne and I had a much needed girls night out.  We got all dolled up and went to the StyleNight Out Launch Party at the Salon in Providence.  (After a tour of half of the state thanks to my wonky GPS - that might I add only stops working when Lianne is in the passenger seat for some reason.)
We watched the video they showed from January's style week.  After that we got a drink and looked around.  Not as busy as I had expected but it looked like everyone was having a good time. 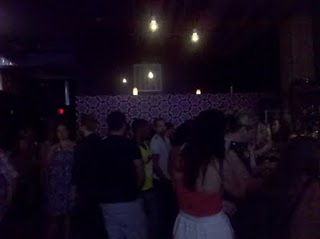 Next to the bar was this. 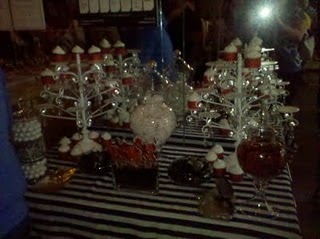 How cute was this set up.  Yummy.

I had gone with business cards thinking I would meet new people and network a bit, but something about the size of the crowd made me feel awkward about it.  After we finished our drinks, we left to walk back to the car I had sort of parallel parked on the wrong side of Weybossett Street due to the construction.  Totally weird, but I just did what everyone else had done.

There I am in my beloved Jessica Simpson heels, on slightly wet cobblestones (wait for it) and I look at Lianne as I feel my heel get caught in between two stones.  Because (say it with me) of course.  I open my mouth to say 'Oh my God Li, I'm going down'... but nothing comes out.

Instead?  It's a slow motion fall (as per usual) with me reaching out to grab the door handle on the truck to keep myself from going over...except it was a little out of my reach so as I caught it I went right down on my knees.  What can I say, I like to put on a show for everyone walking by.

Also?  Ashamed to admit I am used to these things happening when I put on heels.

We drove to Thayer Street and Lianne dragged me into a palm and tarot card reader.  I?  Was freaked.  Something I always wanted to do but have never done because I was always afraid to hear something bad.  We decided it was "for fun and entertainment only" - unless of course we heard good things.  Then it was all true!

She picked the tarot card reading and I was asked to leave the room so my energies didn't get in the way.  OK I thought, this is a load of crap as I sat down outside.  When it was my turn Lianne told the psychic to only tell me good things.  I sat down as she went outside and the woman looked at me and said she would tell me what she saw, good or bad... would I be OK with that.  Yes I said and put out my palm still not really believing.

The very first thing this woman said to me blew me away.  I felt like she was looking through me and it was the strangest feeling I think I have ever had.  I don't even know if I want to put it here... but on the other hand that's what this blog is for, right?

She said 'You are only meant to have 3 kids.'  And then she repeated herself again.  She must have read the shock on my face and followed it up by asking me how many I have now.  When I said three she nodded and again said I was only meant to have three.

How did she know how heavy that weighs on me sometimes - about a fourth, feeling like I'm waiting too long ... and questioning.

She went on to talk about my husband and how he loves me very much, what a good guy he is and how he would do anything for me (all of which I already knew, but still nice to hear anyway).  She said she could also see I have been selfish with myself and needed to take more time to do things... and she sees travel in my future.  (Lots of blogging conferences I hope!)

She asked if I had any questions.  I felt blank.  All I could come up with was a question about my career path.  I listened to everything she had to say and I think she was right on.  (Although also slightly vague enough to apply to almost anyone.)

After that we went to a bar and sat down for some wine while we went over our readings.  I was immediately hit with why.  Why did I not ask is my oldest going to be OK ... and why did I not ask if by saying I was only meant to have three did that mean I was still meant to adopt or not.  No, I asked about my career.

Who knows if our new friend Ms. Cleo was right or not.  I think I would not have believed a word of it had she not stared through me and said the part about how many kids I was only meant to have.  Without that I think I might not have taken any of it serious.  At any rate, we had an awesome time and it was so nice to just sit down somewhere kidless and laugh for a few hours.  And do something semi crazy together.
Posted by Liza at 9:39 AM