Last night I watched my child's heart get crushed over something that was so small... but watching it happen?  Mine broke for him as well.

I took the boys to the YMCA last night because Radio Disney was there.  They loved the station and were so upset when it went off air in Rhode Island.  I thought it would just be an hour and a half of music in the gym, but discovered it was a game show run by Radio Disney about being safe online.

There were at least 20 kids, only a few as young as my guys.  The rest were all older.  They split all of the kids into two teams and asked the bigger kids to help the younger kids.  My guys didn't know anyone else there, yet when they needed to even out the teams and no one hopped up to do so, the Bunny Bee went running over.  I was so surprised he left his brothers.

The game was adorable (with answers like 'get your parents permission first!') and the boys all got called up in the second round.  They could barely reach the microphone and the buzzers, but the big kids helped them and they danced with excitement just being up there and getting a turn.  I was so impressed that the older kids were so sweet to them. 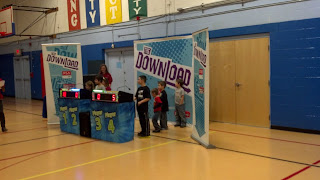 The Yellow team all got a sheet of Muppets stickers for participating.  The Red team with the Bunny Bee?  They were being handed out small bags that looked like it could double as a backpack with a poster and something else in it.  I watched from across the gym as the Bunny Bee sat there so proud watching the bags get distributed... and his face fall as he got passed over for the kids behind him.

I watched him sit on the gym floor and jut out his chin a little and bite his lip.  I could tell he was trying to keep it together.  Not understanding why he didn't get a bag but still hoping someone would come give him one.

They did however give some to the older kids on the team that didn't win.  As I was making my way over to the Bunny Bee he got handed a sheet of Muppet stickers.

And that right there is where his heart finally broke.  His eyes filled with tears as he looked at the sticker sheet, then back at the Radio Disney people... and back to the sticker sheet again.  My heart hurt for him.  I put my arms around him and he burst into uncontrollable tears.  'Mommy why.  Mommy I won.  I was on the winning team Mommy.  Why did I not get one like the other kids...I want to go homeeeeee' he wailed.

I scooped him up, gathered his brothers and took them back to get their jackets as the Doodle Bop screamed 'What's wrong!  What's wrong!' over and over at the Bunny Bee.  That twin thing.  They never can stand it when the other is upset and they don't know what.

Someone from Radio Disney came over to us to ask what was wrong as the Bunny Bee clung to me crying.  I explained that he was on the winning team but they ran out of bags, but that it was OK because he got cool stickers - he just didn't understand.

She told me quietly that he was too young for the bag they were handing out and asked him if he would like a Pirates of the Caribbean poster.  His eyes lit up through the tears she came back with a poster for each one of the boys, which was very sweet of her.

He was excited for the poster, until he put on his jacket and saw an older child with a bag and then it was tears all over again... and we left.

Today they are super excited about their posters I taped up in their rooms last night.  But last night, it was a whole different story.  All last night I kept seeing his little face break down with disappointment and it made me so sad.  I would do anything not to see my boys feel like that.  And it's crazy at the same time how their disappointments can make your own heart hurt as a parent.
Posted by Liza at 2:23 PM