For the last few days the boys have all been insisting it would snow on Christmas.

Since the only snow we have seen in Rhode Island happened to hit prior to Halloween crazy enough, I reminded them more than a few times that it most likely would not be snowing on Christmas this year.  It hasn't been cold enough.

Santa happened to bring the boys 3 new inflatable snow tubes (among other fun things) which I thought practically guaranteed no snow anytime soon.  The years where we have not been so prepared?  Blizzards and big snow totals all winter.

The boys were playing with their new drum set in the basement when Al noticed something white outside the window.  We called to the boys, I grabbed the camera and out we went.  In pajamas, sneakers ... without jackets.  The Big Guy yelled See?! I told you it would snow! and all the boys cheered.

I snapped these photos as fast as I could. 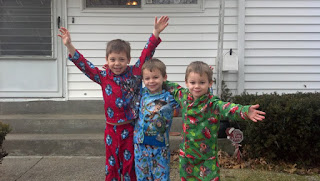 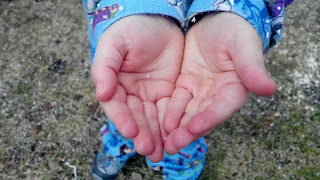 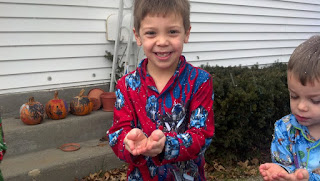 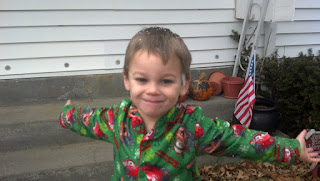 It may have only lasted about 15 minutes, but it was Everything to the boys.  Their own Christmas miracle.