He's my absolute youngest ... even if it's only only by 2 minutes after his twin.

While he was always my daredevil, the one who would climb to a standing position on top of the ride on before he could really walk... who would scale whatever he could ... who I am convinced instigated most trouble the twins ever managed to get into... well he's always been my quiet one.

As young as he is I actually had him tested for some early learning disabilities awhile back.  While the Bunny Bee was clearly advanced and teaching himself how to write his name at age 3, the Doodle Bop was only drawing a line on a paper.  I knew the Doodle Bop was smart, but when he wasn't verbalizing things the same way... I just didn't know what was normal for that age and what wasn't.  Having all the testing for the Big Guy made me more on top of things.  Maybe too on top of things.

A few months back I started to realize just how smart the Doodle Bop is.  Out of nowhere it was all this talk of dinosaurs.  Their names, what they do.  Now he's trying to teach himself to read books... complete with sounding out the words and letters.  At 4.  I've been told the twins are already "Kindergarten proficient" and we are not only half way through the year.  He's been coming home and spelling his classmates first AND LAST names for me.

Friday morning the school held their famous yearly pig race.  Pre-K through 6th grade, each class decorates a mechanical pig as an end to their fundraiser and they all race.  My littlest guy, my Doodle Bop volunteered to be the Pre-K speaker.  He stood up in front of the entire school and told everyone his name, what they named their pig (Santa Piggie) and just how they dressed him up.  His teacher said he did better than the 6th graders.

And he wasn't even scared.  My shy guy who doesn't always want to talk.

He got a special sticker and he was so proud of himself.  I wanted to cry. 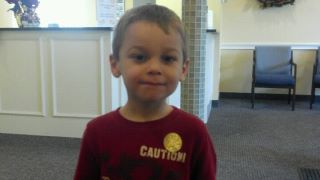 And he has not.stopped.talking. for the last 3 days.  It's a whole new Doodle Bop.  And I couldn't be more proud.
Posted by Liza at 10:28 PM