Santa surprise and the invisible sleigh

Yesterday afternoon I was getting dinner ready early.  I had a home made turkey soup on the stove and I was making corn muffins.  Problem was I had not realized we were out of milk.  With about 15 minutes before nap time I debated on just throwing out the corn muffin mix because I so did not feel like piling the boys in the car.  A moment later I decided we would just go.

Normally I would head to the market but I thought CVS would be faster since the twins were complaining about how tired they were.  They even grabbed their favorite stuffed animals on the way out the door.  More evidence they were exhausted.

We get to CVS and there is this GIANT Coke truck in the parking lot with Christmas trees and music.  We grab the milk and I ask the cashier what is going on.  She had no idea.  I notice a sign that Santa will be there from 1 - 3pm (and it's like 5 minutes to 1).  I walk the boys over to the truck in the lot as other cars are starting to pull up and we are told Santa will be out in a few minutes, that the boys can be first in line.

They were jumping with joy.

We got handed coloring pages and were shown where we could write letters to Santa and put them in a big red mailbox.  The boys can only write their names so far, so I told them to tell me what their letters should say.

The Bunny Bee's started with 'Ho Ho Ho Santa I Love you so so much!' ... he added 2 things he wanted for Christmas, then made me again write 'I love you Santa I love you I love you!'

The Doodle Bop started with 'Hi Santa! Can you bring me...' and then he added 3 things to the list.  Then he says 'Mommy, now write this.  Santa Thank you so so much for all of my presents last year.  I love you and I can't wait to see you.'

Melted my heart.  He thought to say thank you for last year!

Then it's the Big Guy's turn.  'Santa, I want...' and he adds 3 things.  Followed with 'Please remember to bring me lots and lots of presents!'  Anything else you want to add?, I ask him.  Nope!  Do you want to say Love, Big Guy?  Whatever, he says.

Santa then comes out from the side of the giant Coke truck and the boys run to him. 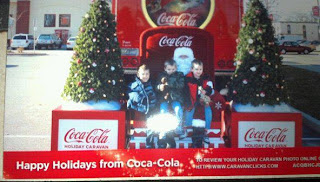 When they were done they could not stop smiling.  We say goodbye, walk back to the car and then the boys start to panic about the things they forgot to talk to Santa about.  I promise we will make sure to see him at the mall before Christmas since they didn't have time to 'prepare' today.  It was unexpected.

The boys seem happy about that.  They buckle in and then start questioning why there was so much 'soda stuff' around Santa and why he came in a soda truck when he drives a sleigh.  I find myself making excuses as fast as I can - it's so close to Christmas I'm sure they are getting the sleigh ready, they must have helped him out by taking him in a truck... (yeah, no idea).

The Big Guy then decides the sleigh must be on the roof of CVS (which we could see from where we were...no sleigh) ... but suddenly the boys are all in agreement.  Yeah, it's on the roof.  We just can't see it.

OK.  So we're going with invisible sleigh?  Whatever.works.
Posted by Liza at 10:09 AM