Kidspeak is still alive and well in the house.

The boys have been doing and saying the strangest things lately.

Yesterday we made a run to Target.  On the way out the boys broke into an impromptu concert of Frosty the Snowman... where the Bunny Bee sang loudly 'frosty the snowman, had a teeny tiny cold'.  (Sing it, it sort of goes actually.)  I laughed so hard I couldn't breathe.  And he was all what, those are the words!

Last night I was on a mission to find one of the twins red Santa shirts for school in the morning.  I couldn't put one on one and not the other - the boys would throw a fit.  I tore the basement and bedrooms apart looking for this freaking shirt.  The Big Guy tends to hoard his brothers clothes sometimes (that are too small for him no less).  I had been in there while he was asleep with a flashlight taking things out of his armoire and putting them on the floor.  I told myself I would go through it all and get it organized in the morning.

Well after 11pm Al noticed the Big Guy's light on.  He found him furiously putting away all his clothes.  His eyes were open but I swear to you it was like he was still asleep.  He couldn't hold a conversation but he was so pissed about his clothes.  Al had to put him back in bed twice to stop him from cleaning (or maybe I should just say stuffing).

Today we went up to Al's office after the boys got out of school to go get tacos with Daddy and some of his coworkers.  We drove over to La Lupita in Olneyville.  The boys weren't sure they would like the food.  We eat tacos at home, but not like the ones made at La Lupita.  Let me tell you, soooo good.  I am not a giant taco fan but these were Amazing!  Fresh, not at all spicy or greasy.  The boys and I got chicken tacos and they ate it all.  Bunny Bee was addicted to eating the limes whole too. 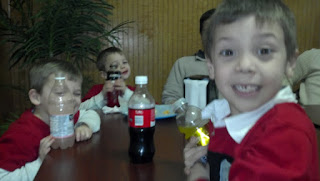 We were sitting on one end of the room at the last table and we were talking about the decor.  Bunny Bee loved the 'party hats' on the right. 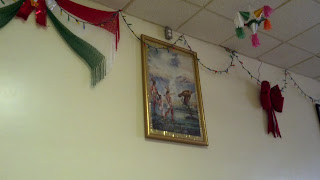 ﻿
Al asked the boys if they would like to come back again for Taco Friday one day.  Doodle Bop and the Big Guy said yes, while the Bunny Bee said no.  I asked him why, reminding him how much he loved his taco.  And that child looked at me and replied ever so loudly,

"Yeah but I just don't like it here.  It's too spanishy."

I nearly died on the spot.  I clapped my hand over his mouth as my jaw dropped and every one of us at the table just stared at each other for a moment.  As I lunched into a we don't talk like that (while not being able to make eye contact with anyone else in the restaurant who surely heard that), Al reminded the Bunny Bee that he too is Spanish - just like Daddy.

This from the child who loves speaking words in Spanish where he gets to roll his R's, is always trying to get the accent just right (and even has an alter ego named Carlos...more on that another time).

And the worst part is that I really drill the whole we are Italian, you guys are also Spanish sort of thing.  They know Abuelita is from Guatemala and that Bis Abuela is living there right now.  They hear Spanish spoken every weekend and we are in the slow process of teaching them the language.  It is so important to me that they know who they are and have pride in it.

For the love of God, where do these things come from.
Posted by Liza at 2:59 PM