The boys each had a nice crisp $20 bill they had been itching to spend.  Christmas money.  After the Big Guy spent some of his birthday money last weekend, it was all I heard about from the twins.

Friday night the Big Guy had his birthday sleepover at my parents house, so Al and I took that opportunity to take the twins out to spend their money.  Those cutie pies asked to be taken directly to Target (taking after their Mom already).  When asked if they would rather go to Toys R Us they seemed ecstatic.

While the Big Guy literally takes forever to make any decision regarding toys and parting with his money...the twins have always been pretty quick.  So it totally took me by surprise when they had us hitting aisle after aisle excitedly yelling 'Look Look!'  When I would say 'OK you want that?'  they would reply 'Nah' and move on again.  Crazy.  This was not the little guys I knew.

Halfway through the store they found the Imaginext toys...which is a huge hit in our house.  Super heroes especially.  Love that all the toys interchange between the sets.  The boys were drawn to the Imaginext Toy Story 3 Tri-County Landfill (at what I thought was $39.99, but would later find out that price was for a toy that didn't happen to be in the right spot).  I explained to the boys that they didn't have enough money....unless they wanted to combine their money and share the toy.  After having said that I really tried to sway them to each get their own toy.

Those boys stared at the package and without even having to ask the other both replied that they would share it.  I felt all teary.  Al told them if that's what they wanted to do that was OK, but first lets look at the rest of the toys and then decide...we could come back at the end if they didn't find separate toys.  The boys continued to look at toys, but also kept asking when they could go back and get the Toy Story one.  By the time we hit the last aisle they were practically racing back the other way. 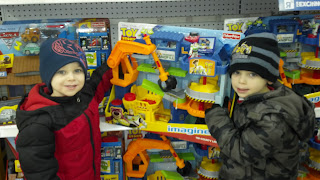 I loved seeing how proud they were.  Al noticed the set came with Buzz Lightyear (the Bunny Bee's favorite), but no Woody (the Doodle Bop's favorite) ... so he snuck in a Woody and a horse for the boys as well.  Turned out that set was $49.99 ... that plus the cost of the extra Woody toy ... and while I was really not happy it came to so much, at the same time we didn't mind because we were so proud of them choosing to share.

They could not get home and changed fast enough while Al took it out of the packaging and set it up. 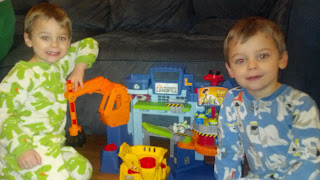 And they have not stopped playing with it since. 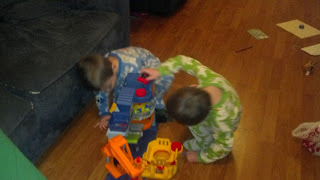 Hours of fun over the last few days.  I love that they made this decision together.
Posted by Liza at 10:00 AM