My boys are a little obsessed with all things Disney XD.

I'm not sure just when it was, but they decided a few montsh back that Disney XD was THE station.  No more would they switch between PBS, Nickelodeon and so on.  OK, sometimes they still switch...  but the number one channel of choice is always Disney XD.

One of their favorite shows?  Kickin' It. 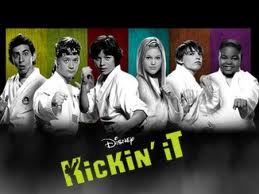 The kids on the show go to a falafel place to eat and there's even a commercial about how when they show them eating falafel?  They are really eating falafel!
Today they requested falafel for dinner.  My guys - who don't always want pasta with sauce on it.  Al was so happy the boys were asking for something new to eat that he brought some home.
They were so excited to sit down and try it. 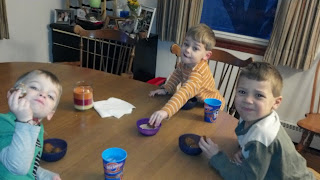 You see the look on the Big Guy, don't you... he's rethinking that choice as he tastes his first bite.
Lets just say I can't credit Kickin' It like I thought I could with the kids branching out with their food choices.  I'll let the Doodle Bop speak for all the boys. 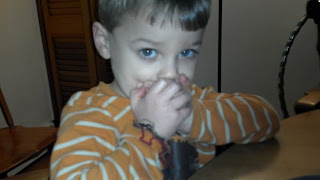