Craptastic days that end with rainbows

Stressed. Behind on every single thing I could possibly be behind on... and maybe then some. I have half finished posts and articles everywhere and my desk is a mess. My brain is fried. I started this day with the feeling that this is the day I would get caught up - and then some.

Instead I spent half the day getting the boys costumes ready for school tomorrow. They will each dress up as a character from a book they like. While I spent part of the week stressing over what the boys wanted and I could not make, I took the advice of Cissa and gave them choices of what I could make.

It took me an hour and a half to pick up the craft supplies but I came in under $16 so that was pretty awesome. I did however have to break my ban on Jo-Ann...but it was for a good cause because I love my kids (even though walking through those doors after all this time made me die a little inside).  The things we do for our kids, right?

The costumes came out really cool and the boys are excited to wear them tomorrow.  It did however eat a giant portion of my day, so nothing got written or posted anywhere.

Straight from dinner we hit up Reading Night at school and all I could think about when we pulled up is the work I should have been home doing instead.  The boys were yelling with glee over this rainbow so I stopped and snapped a photo for them.  Here it is. 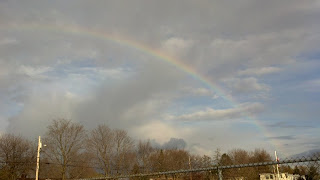 At the time all I could think about what my craptastic day.  But in the end, I enjoyed the time with the boys at school.  Tomorrow is another day right?  Which I will kick off by dressing the boys as a hedgehog from Apple Trouble, the tree (yes I said the tree) from Chicka Chicka Boom Boom and the man in the yellow hat from a Curious George Christmas book we have.  And after I take the twins to their class, I will go into the Big Guy's class with him.  I am telling the class tomorrow about what its like to be a Blogger.

Wish me luck.  (Maybe after that I'll actually get home and you know, get caught up on blogging or something.)
Posted by Liza at 8:41 PM