Just what is for boys or gwhirls anyway...

Something has been eating at me a little.

Last week, I was loading the dishes into the dishwasher while the boys were watching TV in the other room.  I heard the Bunny Bee say loudly 'I love that toy!  If I was a gwhirl I would really really want that toy!  Too bad it's a gwhirl toy!'  Followed by his brothers again reminding him it was a girl toy, as if that was something horrible.

I stopped what I was doing and went to see what the toy was, but the ad was already over.  The boys would not tell me.  It was just a girl toy.  I tried to explain that I don't think there are such things as girl or boy toys.  I told the Bunny Bee if there is a toy he really wants, it doesn't matter if he thinks it is for girls, I will get it for him.  He shook his head no.  I then said Hey did you know when I was little I used to play with GI Joe's and some of Uncle Stephen's cars?

The Big Guy looked horrified.  But you're a gwhirl!  Those are for boys!!!!

It didn't matter what I said, the boys were not.budging.  I left the room after again telling them if there is something they really want, they can talk to Mommy about it.

Which brings me to a few days later - Saturday afternoon.  Birthday party for a friend.  The boys were having so.much.fun!  Bounce house, pony rides, the Easter Bunny made an appearance... and there was face painting.  Only the Doodle Bop decided to wait in line, and only if I waited with him.  So wait we did.  He was incredibly excited and listened to the older girls in front of him discussing butterflies and the like.  When he was almost at the front I asked what he wanted.  He gave me the biggest smile and said A butterfly!

For a moment, I cringed on the inside.  Did you look at the choices on the board?  There's batman...and then I stopped.  I thought about the conversation I had tried to have with the boys a few days ago.  If he wanted a butterfly, he was getting a butterfly.  When it was finally his turn to be seated, I moved behind the table to get a good shot with my camera.  The older lady doing the face painting asked what he wanted.  I heard him.  Clear as day.  'A butterfly' he grinned.

What? she said making a face, as if she didn't hear him.  She looked at the parents in front of her and asked what he said.  No one answered.  As I stepped forward to see what the problem was, she asked who his Mom was.  I am, I said.

What does he want?, she asked.

A butterfly, I said.

She made the most horrible face and said 'And that's OK with you...'

Yes! Whatever he wants, I said.  I was horrified.  And oh so mad.  I wanted to scream He's four!  So what if he wants a butterfly!  Instead I just smiled.  That lady actually shook her head, then started to paint his face... while admonishing him a few times for moving.  My heart was breaking a little on the inside.  She asked if he wanted glitter.  Big smile.  Yes!  Shook her head again and put the glitter on.  Watching my baby's eyes light up when he saw his face, I knew I made the right decision.

Who does that woman think she is.  And what is her problem with putting a butterfly on a 4 year old boy.  Hes not making a social statement, he just wanted to be like the other kids in line and he happens to like butterflies.

How cute does this guy look. 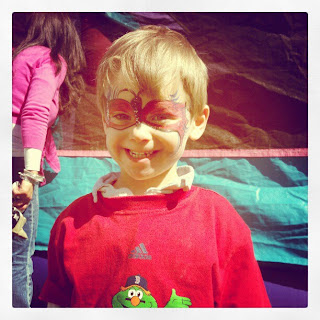