A plea for help

I'm sure you noticed how quiet things have been on my end lately.  It has not been for a lack of things going on.  There has been so very much that I have wanted to say over the last month, but I knew it was not my place.  Today I asked for permission to talk about some of it.  You see, this is not actually about me (although I feel it so deeply) ... it's about Jules.

While its happened so slow it seems so fast at the same time.  She is sick again.  And we need some help.  A few weeks ago she spent a week in the hospital for what we all hoped was just another infection... but the doctors could not really seem to get to the bottom of what it was or wasn't.  Monday she was at a new oncologist office and while nothing is definite, they suspect that the Lymphoma she once had is back again.  She needs a new PET scan and was told to expect to see some malignancies.  In the meantime she's to wait on the PET scan to be scheduled.

I mean how are you just supposed to sit around and wait after being told something like that.  I couldn't even breathe when she called me.  All I could say was what do we do, how do we fight this.  What's the plan?

Well she spent the entire week just waiting.  And no news.  This morning we met for breakfast at Scramblers and talked about the totally awesome things she will do to her hair if she has to go into treatment again.  All the colors she can dye it.  I have to say I think I will join her in the crazy colors and even rock some sparkly wigs too in support.  From the table she tried calling to check the status of her PET scan but couldn't get through.

After breakfast we hopped into my truck and drove down the street to the oncologist office together.  To our shock she was told that her insurance company actually DENIED the PET scan request and they are now appealing it... but that will again take a few more days.  The oncologist couldn't even believe it was denied.  She's never been denied anything before now when it came to testing.

I knew what a PET scan was, but until then I did not know that for her it meant a $40,000 test which needs to be approved by insurance OR paid prior to the test even being scheduled to begin with.  How is that even justified.

I sat with her as she called her insurance company.  Jules explained why she needed it, that her doctor had already appealed it and how could they do this to her.  She isn't even 30 yet and she has 3 small daughters at home and she is looking at a recurrence.  How can they make her wait on all this red tape.  The woman on the other end was totally unsympathetic.  I could hear her read her explanation that the doctor needs to show more proof about why they need it (clearly off a piece of paper) and that was that.  It didn't matter what Julie said, that woman was sticking to her response.

We drove back to Scramblers, got her car and met up again at Dunkin Donuts so we could be close to school and I could get the boys.  We sat at the ONLY available table in the entire place, which happened to be next to a pretty big table of some older gentleman and one older woman.  Not five minutes later this old man pulled up a chair at the end of the table, but really right next to Jules.

How can I describe this man... all I could think of was Frankie Carbone from Goodfellas... but older.  He immediately started talking to us and it was just hysterical.  He was like the Mayor of Dunkin Donuts and he knew everyone, even the newscaster who came in.  He started talking about how he had survived cancer and pointing out all of the other people there who had as well.  As crazy as it was it just felt like we were supposed to be there right then.

Jules and I walked out of there laughing so hard.  What a weird and random morning.

So now that I've filled you in a bit, Jules needs help.  And I'm not sure how to go about getting her this help... because while you can spend all the time you want appealing things or getting a lawyer... it still takes time.  And time is something that ... if this IS the Lymphoma back again ... she does not have.  Because the longer she waits the more it can spread.

There has to be an avenue to speed this up, something we just don't know about.  Short of throwing a last minute fundraiser, who knows what we can do.  I have some super awesome friends out there and I know that someone has to know something about how we can get this done as soon as possible.

Jules is the first person who I have ever really 'let in' so to speak, since...this happened.  We talked a little about that last week when she was waiting for that oncologist appointment.  How the boys and I will be there to help her and the girls through whatever we can.  I'm done being mushy and worrying over the what ifs.  Its time to take action and kick cancer's butt once and for all.

So I ask my friends... what can we do for Jules to speed this all up. 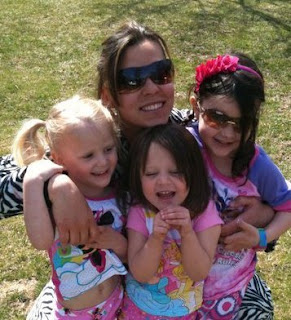