School's out for summer!

How can it be Thursday...

This week has gone by so fast.  Monday was the last day of school for the boys.  When the Doodle Bop came out the front doors he took one look at me and burst into tears... for over a half hour.  He blamed it on not getting a sticker (which was part of his end of the day pre-K routine), but I really think it was him not knowing how to handle the end of his first year.  And that baby was a mess.

After a trip to Al's office, medium Slurpee's from 7-11 (that I immediately regretted sugar wise) and pizza for lunch to kick off the summer... and calm down the inconsolable kid... summer had finally begun.

Tuesday I was so sick I was in bed pretty much the entire day.  After lunch I convinced the boys to all lie on my bed with me and watch whatever they wanted on TV just so I knew what they were doing.  And I didn't get up.  By 5pm the Doodle Bop was asleep too. 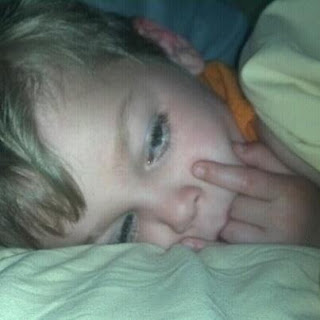 I did manage to pull it together so I could spend the last two days with my cousins (who leave to go back to Colorado tomorrow).  Wishing I had had more time with them.  And been less sick.  Yesterday we hit up Scarborough Beach. 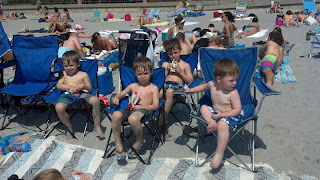 The boys had me show Aidan how to dig up crabs.  Because they still won't dig them up - they make me do it.  Aidan would smile, scream and then dump them out into the sand... then ask for more.  My boys were putting them into buckets with water and sand in the hopes that this time I might say Sure we'll take them home!  (Um...no.)

Last night was the Big Guy's last baseball practice.  In 98 degree weather.  I was floored it was not cancelled, given the fact that we are talking about four, five and six year olds.  They spent the first half practicing but made the second half into a free for all water gun fight which was really cute.  The coach even let the twins play.  At the end all the kids got to take a water gun home. 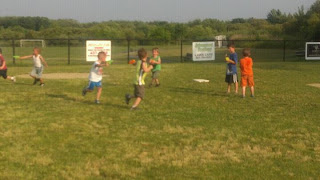 Today we hit up Sand Hill Cove since it was more kid friendly at my friend Jen's suggestion. 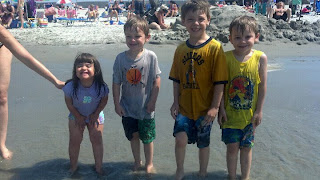 I had only been there once before when the boys were babies and didn't get the attraction at the time.  Oh man, I love it now.  The boys could go out further and I didn't have to freak until high tide.  SO much better for them!  And it was like a Cranston reunion with everyone we were running into.  Who knew!

No crabs though!  OK OK there were some dead ones floating in the water, but I could not dig up a live one for anything.  We did however find a ton of muscles, shells and snails so that was neat. The boys had fun and we hated having to say goodbye to everyone on the beach.  My cousins are all leaving in the morning and we had an afternoon of appointments for the Big Guy so we were heading out just after noon.

And then the fun began.  100 degree heat at home.  Do you know how hot that makes it?  So hot that at the orthodontist office the x-rays they took of the Big Guy's mouth melted in the machine and would not process.  Seriously.  They had to take a second set (for when the machine cooled down) and said they would call us.  After seeing what tomorrow's weather looks like, I don't think I will hear till next week.

This by the way was After the Bunny Bee fell up (yes I said up) the stairs to go into the office scraping his leg and splitting his toe open.  And after the Big Guy fell out of the waiting room chair and the Doodle Bop cried just as hard as the Bunny Bee (because he was tired).

Next up?  Physical therapy for the Big Guy.  In the pool.  Where the twins cried the entire time.

I tired so hard to pull it together this week and function as close to normal as possible.  But right now I am so drained.  I drove all over creation today in the heat and I am not coming out of my air conditioned room.  Until tomorrow when the boys want breakfast I suppose.

Yeah, I guess I'll have to come out then.

Until then, someone needs to bring me some wine.