Out of nowhere. Thursday morning I thought my allergies were bad. When the allergy pill didn't help at all I started to wonder. And hope that I was not getting sick. I sure felt fine aside from the sneezing. By Thursday night I'd gone through a box of tissues and could not breathe. I was up till like 3am only to have to wake up at 7am to get the Big Guy ready for his Kindergarten graduation.

He was handsome. It was adorable. I wanted to write a big giant mushy post... but in a way? I have no words. My first baby. 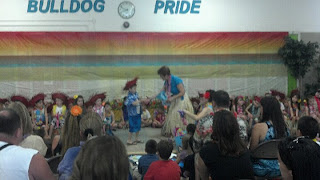 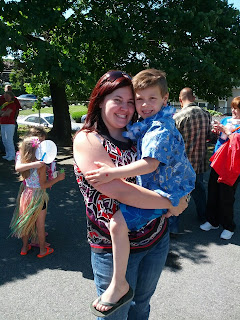 After graduation we took all the boys to Chelo's Waterfont for the first time. They love Chelos but had never been to this one. We told them they needed to have a special lunch to celebrate graduation week. We sat outside and they had the best time standing on the dock looking out into the water and watching the boats. 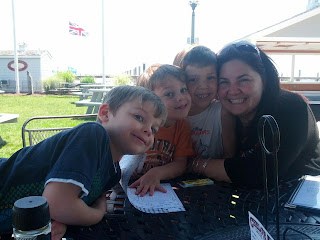 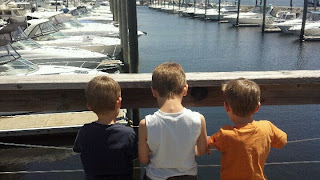 That afternoon I was down for the count and slept on and off for hours. Whatever it was had hit me hard and I could not function...or blog all the cute Kindergarten graduation things I thought I would. I barely remember Al waking me to tell me his Uncle Otto was here from Guatemala and he was taking the boys to visit him. Saturday morning I was able to get over there with them for another visit. 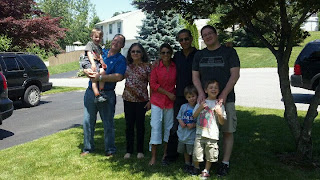 I was determined to function because my family from Colorado had come in the night before. Not sure how I did it, but I made it to the cookout. And with the help of my cousin Kerri (we are the loud ones) organized a group photo of all the cousins on my Dad's side of the family. ALL. Like this may very well be the only shot of every single one of us together. And I love it to pieces. Look how cute we are. Ages 35 to 11 months old. 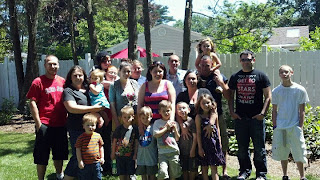 By the time we were home last night and got the kids into bed (hours late) I actually had no voice. None at all. And today you can hear me but trust me it sounds horrible. The boys think its hysterical. Something about telling the Bunny Bee that I can't really talk makes him HAVE to immediately ask me triple the number of usual questions... and still expect answers.

We had a great Father's Day. Everyone got up early, the boys gave Al the present they picked out, the things they had made in school and even promised to clean his car later. Totally their idea and it made me melt that they came up with that on their own. 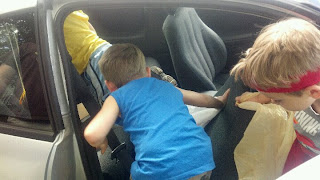 First stop was the Will Speck Memorial Race, put on by our friend Juliette in memory of her dad. Our second year. The boys were so excited to donate their older pairs of sneakers (of which we had many) to help other kids and it makes me so happy that is a part of the day. All the boys were in new age brackets this year and for the Big Guy that meant an entire lap around the track. 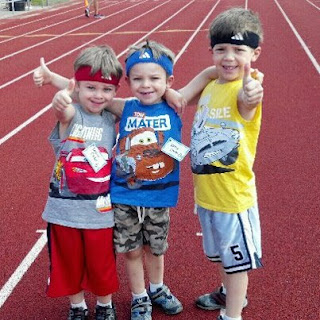 He did amazing! For being the youngest in that bracket - and smallest - never mind the cp... my God I was all teary watching him run! 3/4ths of the way he was NOT in last place, there were kids behind him. Older kids. I was screaming my heart out though I know he could not hear me since I barely had a voice. 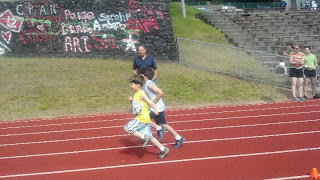 He was running out of steam and fell into last place. 5th out of 5 at the finish. It killed me a little when he asked me if anyone finished behind him. I told him yes, there was one boy behind him. And he beamed. I hated not being truthful but I could see in his face he needed that boost for his self confidence.

The twins were crazy confident at the beginning. Hamming it up as always. 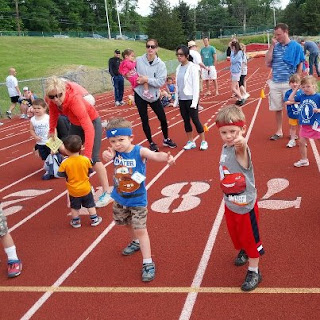 They ran as a team, not individually...like everyone else. They took 5th place and participant ribbons but that was ONLY because they didn't run to the guy with the sticks. It was too funny. They crossed that line together and stopped, while kids that came in after them ran for the sticks. And they didn't even notice. The Bunny Bee cried because he couldn't pin his ribbon on and that was all. Crazy proud of all my boys.

After that we had the Big Guy's baseball game... and after THAT (yeah I know) we hit up Roger Williams Zoo for a few hours as a family. Hasbro's Our Big Back Yard is a very impressive addition, it was the boys absolute favorite part. 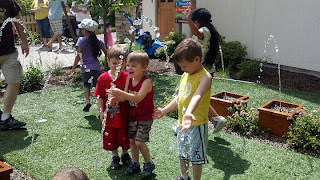 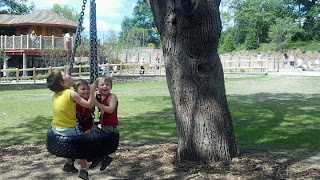 Now it's just about 9am and I am beyond drained.  Looking forward to the boys last day of school tomorrow and crossing my fingers that I wake up feeling better - and with more of a voice back.
Posted by Liza at 9:10 PM