Buh-bye to the Shark Tooth

In case you haven't heard, I am back from NYC!!!  And I am drowning in things to recap - everything from New Mexico with Mercedes-Benz to NYC with BlogHer...along with another exciting trip announcement I will be making soon.  (Right after I break it to my kids.)

I have pieces of at least 10 different posts for 3 blogs going right now and I have spent the morning sorting through photos to place with each post.  I will get there by the end of the week for sure so stick with me here.

The night before I was coming home from NYC, the Big Guy finally lost his top tooth that had been loose forever.  He saved it to show me when I got home the next morning instead of leaving it for the tooth fairy that night. 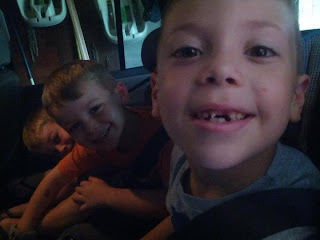 Yesterday was the day we had to go to the Oral Surgeon to have that extra third front tooth removed, the sideways one they were calling a shark tooth.  The experience itself was horrible, though I don't know which one of us had it worse.  OK he did...but as a mom it was awful for me too.  They didn't take us in until a half hour after his appointment time, which I thought was horrible to do to a nervous 6 year old.

When he got the gas, it was one of the funniest things I have ever seen in my life.  I resisted the urge to pull out my cell and take some video for the blog.  Tons of giggles broken up with things like:

I'm floating, do you see me floating?  I'm serious.  How high up am I right now?

When is Mr. Monkey getting the gas!  Mr. Monkey wants to come to space with me too.  Who is going to give Mr. Monkey the gas!!!

I was laughing so hard and thinking how easy this was going to be...feeling so relieved.  Then they came in with the Novocain.  And the tears and screaming started once he got the first needle (lets just say he got a few).  It was terrible being told to hold his hands down.  When they were done it took time to calm him down again, but once he got the gas I could take another breath.  He was all giggles again and playing with the suction tool that would be for his mouth.  It was then that I thought I could now stop worrying, he was OK again and there would be no more needles.

Before they began the procedure they had to give him another needle...while I helped to hold him down.  And I had to stay there holding on to him while they used these tiny little forceps looking things on his tooth to pull it from his mouth - which took 5 attempts before it came out.  The screaming and crying was horrendous and I was beyond mad.  While the rest of the staff was wonderful, I would never go see that Oral Surgeon again for so many reasons I won't even get into here... there just has to be a better way to do this to a 6 year old.  I had no idea it would be like that.

I took him out to Newport Creamery for an ice cream lunch and I hoped that he had started to forget about what an awful experience it was.  By last night he was pretty excited to put that tooth under his pillow for the tooth fairy to take, because the Oral Surgeon told him you get double for an extra tooth like that.

How freaking adorable is this kid with no top teeth.  I can't stand the cuteness. 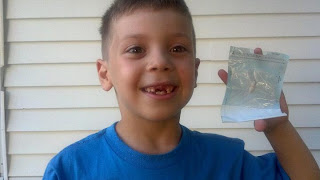 To put it in perspective what this shark tooth looks like, check out the photo below.  On the left is the baby top tooth he lost when I was in NYC.  In the middle (next to that nickel) is the shark tooth - which was his other front tooth.  I nearly passed out when I saw it come out of his mouth.  No wonder it never would have come out on its own. 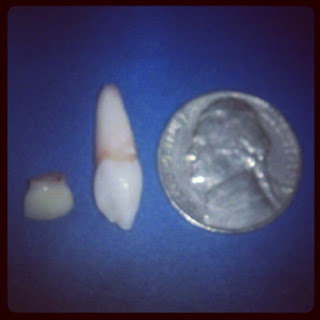