I know what you are thinking... she's FINALLY going to tell us about New Mexico.

Yes.  Yes I am.  And I seriously have to start blogging trips as they happen.  I think that will make my life so much easier, rather than trying to catch up after I get home.  Because things are crazy enough at home with the boys to begin with.  That will be my goal for the next trip.

I got to go represent 5 Minutes for Mom on a trip to Santa Fe, New Mexico with Mercedes Benz for the first leg of their worldwide launch of the 2013 GL-Class SUV's.  I was beyond excited until the day before I was to fly into Albuquerque... then I was a mess.  I do not love flying by myself, never mind flying across the country - but you all knew that from the Jamba Juice trip.

That morning at the airport when Al and the boys dropped me off I started having a breakdown right outside the car.  I thank God that Becca works at the airport because right after she got in she came and sat with me and calmed me down until it was time for my flight.  My flight was great by the way, there was one stop but I didn't have to get off the plane and I had a window seat so I just relaxed.  A little turbulence on the second leg but still OK. I got off that plane all excited to start my trip.

And that is where things started to slowly roll downhill.  I found the Mercedes booth, handed over my license, signed a form I didn't read and was thrown together with another guy on the press trip to drive the 2 hours into Santa Fe.  I pushed the visions of being murdered in the desert aside and off we went...on a ride that did not take us the way we were supposed to go...but we made it to the hotel none the less.  That guy turned out to be really sweet, originally from England and had step kids my age.

I was thrilled to settle into my hotel room after check in, only to be driven in a cart to my room - which was actually like a giant apartment.  A gorgeous giant apartment with a patio, fireplace, amazing walk in closets, bathroom with heated floors and a jacuzzi 'big enough to drown yourself in' according to the guy who gave me the tour ... and while it was all so beautiful I was exhausted from traveling and feeling not so safe about being in my own giant apartment away from everything - and everyone - else.  Had I been with Al it would have been amazing.  By myself?  I was kinda uneasy.  I mean there were two colors the entire drive there...green and brown.  And there were 3 kinds of billboards along the way... don't drink and drive, come to our casinos... and my most favorite... so and so is missing or has been murdered, help us find them.

Did I mention I watch way too much ID channel and am sort of obsessed with crime shows?

Yeah.  I may have had more than one breakdown that trip on both Al and Jen.

What helped so much was meeting up with Emily that night and sticking together for the weekend.  Dinner that night had an amazing sunset despite the rain. Check this out.  You just don't see things like this in Rhode Island. 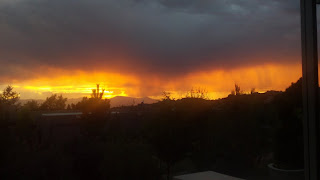 The next day I partnered up with Emily and Zippy (who was actually from my hometown, what are the odds!) and we drove all around New Mexico for the day.  I have to tell you guys how amazing the car was, because I drove for over 6 hours and it didn't feel like it - at all.  Such a smooth and quiet ride!  Our first stop was at Earthship in Taos.  Green, sustainable living, the only thing they pay for is their Internet connection (which was totally weird).  On one hand it was so cool to see them building their houses out of soda cans, tires and glass bottles... 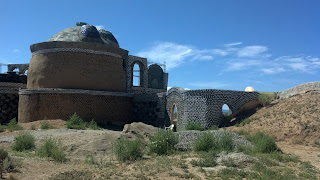 and growing so many different veggies... 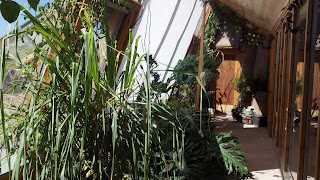 but I could not shake the feeling that if we didn't get out of there, we wouldn't be able to leave.  It felt all culty and I don't even think I could explain to you why.  (And this was after what may or may not have been a body dumping near the Rio Grande...ask the other girls!)  I was so relieved to be back on the road.  The photo below is from my favorite part.  We had to go down this windy mountain like road - no guardrails in sight - covered in dirt.  The cars in front of me were flying down and I could not resist the urge to do the same.  Emily and Zippy were not so thrilled with me, and truth be told I'm sure I would have felt the same way as a passenger... but it was awesome! 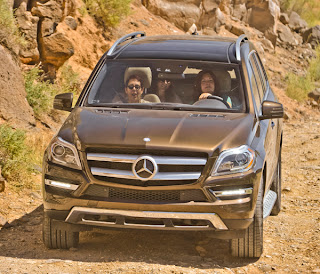 And at the very bottom there was a giant puddle filled with mud and I just could not help myself.  I plowed right through it.  Only to look up and find some of the Mercedes reps at the bottom watching me.  For a moment I thought they would be pissed... but instead they cheered and gave me the thumbs up which totally made my day.  This photo below doesn't do the mud justice, but here it is. 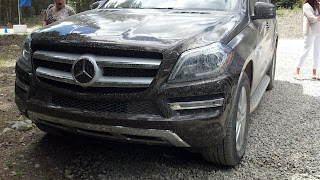 That afternoon we had lunch at a Bavarian restaurant and then got some time to shop as well.  I bought the boys dyed corn necklaces and scorpion lollipops.  For dinner that night we were taken to an amazing house for a party - complete with chefs in the kitchen and a band.  So much fun! 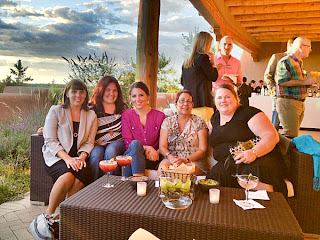 There were only 6 of us 'mom bloggers' if you will.  Alicia, Me, Emily, Zippy and Stacey from left to right.  Desiree was with us too and I have no idea why she didn't make it into the photo.  Leaving early the next morning for a ride back to the airport, I found out that the vehicles has heated/cooling massage seats.  To which I said son of a bitch!!! I drove for 6 hours the day before and had no idea.  Which will teach me to read up on the car more next time.  Ha ha!

Going home was a nightmare.  Clear sunny skies in New Mexico but the weather at home delayed our flight 4 times... and by delayed I mean hey we are leaving late, no we are leaving on time, no now we are leaving late again - now that you are all back in line, nope, now even later!  When we finally left I fought back the tears over just being so tired and wanting to hug my kids.  The plane ride was the worst of my life.  So much turbulence that when we landed the entire plane actually burst into applause.  Has that ever happened to you?  Oh my God it was crazy.

They wouldn't allow us to get off the plane, 20 feet from the gate, due to lightning... and the time to make my connection was getting smaller and smaller - down to minutes.  I furiously tweeted the airline to see if they would hold the flight but no one would answer any questions.  When they let us off I checked the board which said on time and I ran my butt off as fast as I could to the next gate...I got in line with 2 minutes to spare...as in before the plane should have taken off.

Only for them to delay it two hours.  And that right there?  Is when I 100% lost it.  I called Al from my cell and melted into a hysterical mess.  You would think there was a blizzard at BWI.  No where to sit, lines as far as you could see...it took me an entire hour to get a cheeseburger and a Jamba Juice.  When I sat to charge my cell at the next gate over, I nearly missed my flight home...the girl doing the announcements didn't do it on the loudspeaker.  I noticed the crowd thinning and went over just before they closed the doors.  Holy turbulence again...but this time I barely cared...I just wanted to be home.

And that my friends is the nightmare that was New Mexico.  Nothing against Mercedes.  They were wonderful and oh my God do I need that SUV now!!!  Scorpion lollipops?  A giant NO from all my kids.  Not as cool as I thought that would go over. 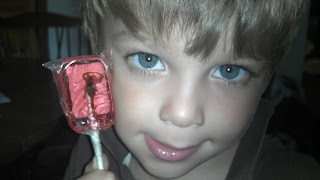 This child is giving me the what were you thinking look.

I know I didn't tell you all too much about that car, but that one is going in the 5 Minutes for Mom post that will run very shortly.  I will link it up when it goes live.
Posted by Liza at 1:04 PM