Here we are, another week has nearly gone by since I blogged.  I am trying so hard to get myself back on a regular schedule but life keeps taking over.  After I wrote my last post, I picked the boys up from school and trekked them all to the Big Guy's Friday night soccer practice ... because that is how we spend our rocking Friday nights now.

Towards the end of practice, my Mom called my cell.  I had this feeling that something was wrong, because she knew we were at practice.  Not that I can't talk, but it just seemed strange.  And something was wrong.  My grandfather had a major heart attack at home the night before and was in the hospital.

For a moment, I felt like I went somewhere - time seemed to stop.  I could hear everything my Mom was saying... but I was suddenly flashing to my other grandfather (my Mom's Dad) who passed from Cancer in the hospital ... who I never actually saw hospitalized since he was in Florida.  I flashed on my last conversation with him, telling him how I loved him over the phone the night before he passed when he was in a coma.

And I had this moment of oh no not again, I can't lose him too ...my Dad's Dad who I call Pa - because as a kid I could not say the entire name and it stuck.  My kids call him Opa and they adore him.  We had just seen him on Labor Day and we took this picture of my grandparents with them. 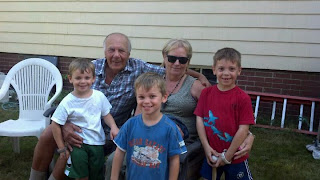 It was not until Sunday he was up to having visitors.  I was so happy to be able to get there and see him.  I brought pictures the kids drew and taped them up in his room.  My grandfather is private so I won't get into details, I will just say that he has a long road ahead.  I want to help more, I want to be there for both my grandfather and my grandmother ... but right now it is hard to know what anyone needs just yet.  And I debate on taking the boys down.  When my father in law has had heart problems in the past the boys have gone so I don't think they would be scared, they handled it well.

At any rate, this is what has been going on.  Yesterday I was in NYC for the Fashion Forward conference.  I thought about not going with everything that is happening, but I am glad that I did.  I will try to get a post up about that later today.  This post in itself has taken me like an hour and a half to write because after each sentence the boys have some sort of pressing question to ask me.  Yaaay afternoon Kindergarten.  (Yeah... still not loving that one.)
Posted by Liza at 10:43 AM