This weekend was ... definitely less than stellar.

OK, maybe not as bad as Joanna's weekend, but still pretty bad.

Friday I got to play find the soccer gear after the Big Guy separated and partially hid it all so he didn't have to go to soccer.  (That sport he loves more than anything.)  I think practice after a full day of school is too much for him, but if he wants to play in the Saturday games, he needs to go to the Friday practices.  All three boys drove me just about crazy getting out of the house and we were indeed a few minutes late for practice.  Which drives me crazy (not being on time) by the way.

Saturday after a few hours on the soccer field, the Doodle Bop and I were being silly on my bed.  I have no idea how it happened, but he managed to kick me under - and then in - my ribs.  Stars like I have never seen.  I couldn't breathe and the poor kid was hysterical.  Once I could breathe, I felt immediate bruising in my left side which is crazy.  The hypochondriac in me worried I had internal bleeding but since I'm here an entire day later, we'll just go with I must be fine.  ...Right?

Al told the boys to go downstairs this afternoon and clean up the toys they left out in the basement.  So naturally the Big Guy flipped the freak out.  Screaming, crying... Several times I gave him a choice.  Clean up with your brothers or spend the afternoon in your room.  While he didn't really choose the afternoon in his room, that is sure what he ended up with.

Which then turned into over two hours of even more intense screaming and crying and door slamming from his bedroom... complete with... wait for it...hand drawn photos of ME. 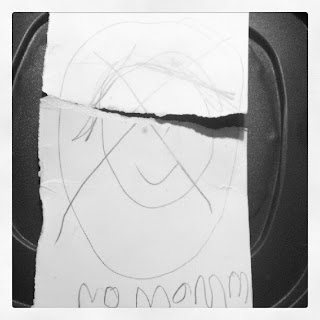 I couldn't help it, I did something horrible.  I laughed my butt off as he shook it in front of my face screaming at me.  For some reason I found it hilarious.  So he ripped it up and threw it at me.  Only to furiously draw another. 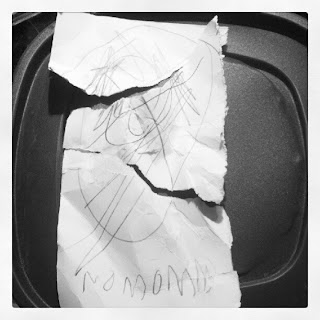 Which he then ripped up again and threw at me.  While telling me I was never allowed in his room, or near him again, and he would never ever Ever buy me a present.  Ever.  And I'm mean.

Long afternoon.  When it was dinner time and he was calm I thought we could all finally relax.  Until that is the twins threw an epic fit over not liking dinner.  Who refuses to eat chicken with carrots, onions, roasted potatoes, stuffing and gravy.  And why did I spend over two hours cooking dinner?  I told those boys if they were not eating dinner they could dump their plates and just shower and go to bed.

And that is what they did.

Who does that?!  Oh, I remember... my brother used to do that when he was a kid.

But these are the kids with the undiagnosed blood sugar issues, which kick in the next morning after a night where they don't eat enough.  So yeah.  Guess we will see what the morning brings.

As for me, I am breaking out the wine.  (Like you didn't already know that.)  And I am throwing in the towel on this entire weekend.  Next to no blogging done, so much for finally catching up.  Here's to tomorrow.
Posted by Liza at 7:54 PM