So, tonight a bunch of Rhody Bloggers braved the season's first snow... 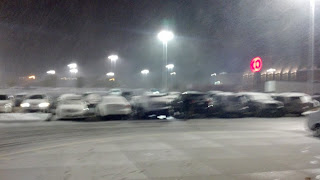 (one week after the hurricane) to attend an exclusive pre-opening party inside the Warwick Mall's new Nordstrom Rack store. And it was so worth it! 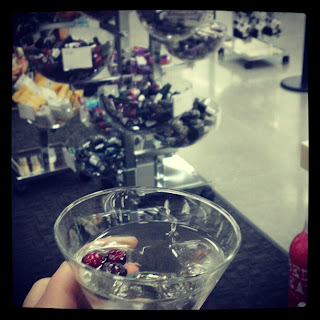 Yes, that is a martini with cranberries in it... while I walked around the beauty section. While there were several Rhody Blogger girls going to be attending the event, it was pretty busy and I was lucky to be able to catch up with a few of them. Here is Kristin from Mama Luvs Books, Joanna from Baby Gators Den, Heather from Housewife Heather and I. And please lets not talk about how badly I have to dye my hair. Damn those bright lights (and who wants to come dye my hair). 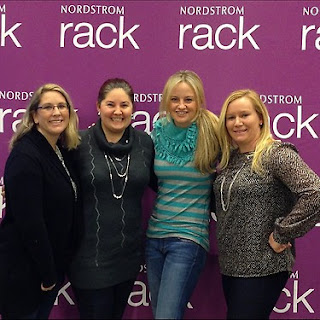 The deals were amazing. In addition to a huge women's department, they also had a sizeable men's and children's section. And the store is HUGE. For additional information on all the girl things, check out the post on Buy-Her where I included so much more.
I literally had to stop myself from buying things as I im'd my husband about all the deals I was scoring. I'm sure he was not half as thrilled as I was, lets be honest. However, see these Hunter rain boots with the bag? $39. From $135. 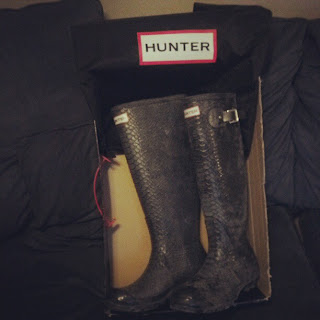 And see these cute rain boots all the boys are sporting from Western Chief Kids? $16.90 for the Big Guy's fire boots, and $18.97 each for the Bunny Bee's monster boots and the Doodle Bop's dragon boots... each normally selling for $29.95. 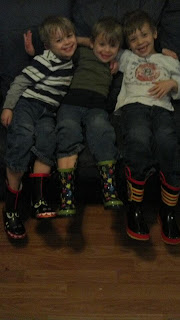 So for those doing the math, I spent a grand total of $94 ... for FOUR pairs of boots. You know, for less than the original price of one pair of Hunter rain boots. Warwick Rack (Nordstrom Rack at the Warwick Mall) opens at 9am tomorrow morning. You will not believe the deals you will find. I'm an instant fan.
In addition to their website, you can also follow up with Nordstrom Rack on Facebook and Twitter.  To specifically follow the Warwick Rack store on twitter, click here.
*Disclosure: At the event, we were provided with refreshments and a goody bag. Opinions are all my own. (I bought all of the boots!)
Posted by Liza at 7:34 PM