So... we already established how much my kids love bubbles.

But bubbles that GLOW?

Yes. I said bubbles that Glow.

We got the chance to try Super Miracle Solution Glow Fusion bubbles from Imperial Toy and the boys went crazy over it. They had first seen the ads on TV and were begging me, so when the package arrived they were beyond excited. We waited until it was just about dark and brought the kids out in their pj's and sweatshirts. My husband poured the special formulated Infusion Activators (two small packages - A and B) into the bubbles as the kids waited anxiously. 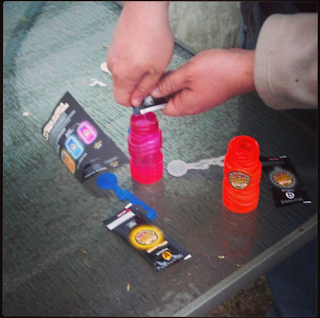 We mistakenly started to shake the pink for a moment. You don't want to shake it. It still glowed, but we didn't get the same effect as the orange - which we stirred as the directions stated. The orange? Lit up brilliantly! Instant oohs and aahs from the boys. Even with just a little bit of daylight left you can see the glow on the bubbles. 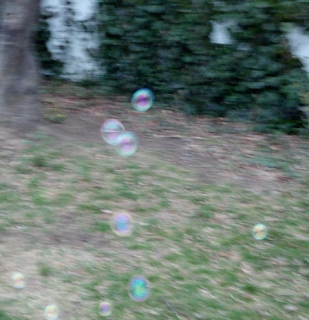 Glow Fusion bubbles retail for $4.99 and can be purchased at Target, KMart, Toys R Us and more. While they are recommended for ages 8 and up, I still thought it was still perfect for my guys - at ages 5 and 7 - as long as we did the mixing and supervised the play. Below is the boys' review. Captain America cameos included.

And... long after the boys went to sleep that night, Al went out to take the dog for a walk and called me outside. The bubble solution was still glowing! While I couldn't quite get the bubbles captured on camera, we could certainly see them... check out the orange glow from the bubble jar. 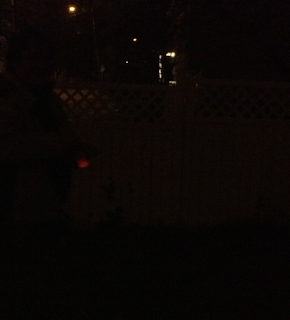 
**Disclosure: We were sent 2 bottles of Glow Fusion bubbles from Imperial Toy in exchange for our honest review. Opinions are, as always, all our own.**
Posted by Liza at 9:17 AM