All things Despicable Me

The boys have been dying to see Despicable Me 2 in the theaters - from the moment they saw the very first commercial. Not only had they loved the first one, but finding out that the second one would come out on the twins birthday sent them over the edge.

I know y'all remember this.

All I have heard for weeks on end is July third Despicable Me 2 comes out. On our birthday! Followed by Can we see it? And something about Purple minions this time!

I entered to win a 4 pack of tickets to see it premiere early ... and we won! Al took the boys as a surprise last week. Today I found them playing the commercial in slow motion and laughing really hard. They wanted to make a video about seeing the movie.

The Bunny Bee and Doodle Bop's sixth birthday is this week. Friend party at the local trampoline park. After not being able to decide on a theme, I asked them if they wanted to have a Despicable Me party. I had already found these online from Cheeky Kitchen and thought it seemed easy enough to make. 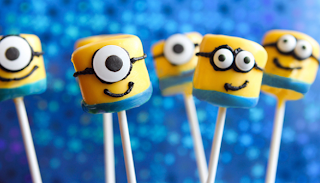 With the new movie coming out, I thought that Iparty would be overflowing with minions. I was so wrong. I could not believe how ... empty ... it looked. I had just been there a week and a half ago to get the boys graduation balloons and nothing was out of the ordinary then. Apparently Iparty is being changed over to a Party City and not only did they stop ordering things, they are also clearing out most of their inventory. So disappointing.

And now I'm on a mission.

To create a DIY Despicable Me 2 birthday party from scratch ... in the next few days.