I have come to the conclusion that I need a goal. Something to work towards. It has been a really hard adjustment for me having the twins in full day school the last few weeks. Some days I am still incredibly busy. But other days? When I have too much time to sit and think? And believe it or not the house is actually clean (due to the impending move) ... and it's just me? It can be horribly lonely.

I spent the last six years with these two tiny little guys following me everywhere. Wanting me to sit with them all the time and just cuddle. And now that they aren't home to do that? I don't know what to do with myself at times.

A few months ago Jen, Liz and Kameron started talking about doing the Spartan Beast. My initial thought was they were Crazy, followed by a hey maybe I will do it with them! But then reality set in and I had barely been able to keep up with anyone at Gored for Good and that was just a 2 mile fun run that Kam helped me push though. Who was I kidding, there was no way I could do the Beast.

Three weeks ago Laura got me started on C25K. We joined Dawn who was already a few weeks ahead of us and kicking ass. I told them I hated every single thing about running. I have told you all the same. It isn't getting any easier, though I am sure my weight isn't helping things either.

As the Beast got closer I found myself wishing more and more I could compete with the girls. I was so proud of them when they completed that race together over the weekend. They are amazing to have completed what they did. I seriously got teary looking at the pic of all 3 of them at the finish line, and of their individual medals. (Jen was awesome enough to let me use this pic of theirs in my post.) 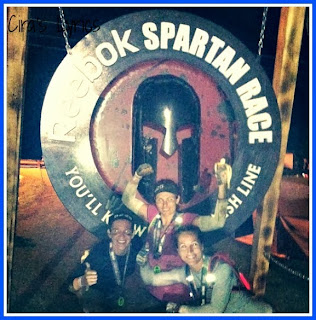 So I have made a promise to myself of sorts that I will finally get myself in shape. Once and for all. (Like you haven't heard that before.) Before? There was always an excuse. Not anymore. We cancelled our gym membership in prep for the move, but I didn't go like I should have anyway. I have already asked Kelly to help me set up a home gym of sorts like she has in the garage when we move to the new house. I am so excited she's ready to help me with it. It it's there, I will have no choice but to use it.

If I'm going to do it I might as well go big. I have about 10 months before the first race and I think I want to try all three. The Spartan Sprint, then the Spartan Super, and finally the Spartan Beast. All in one season. Baring any changes due to the boys possible new-found career, this is my goal. Sounds like I'm already making excuses doesn't it. I guess what I mean is that if something with them were to conflict, they would come first.

That being said, here is my goal and I am saying it. Hell even my 7 year old had crazy muscles. How can he be more in shape right now than I am. Have you seen this child? 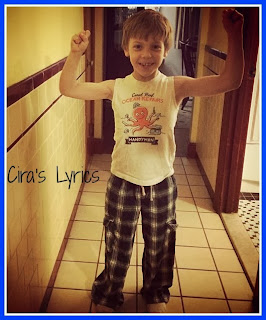 And his brothers are not so far behind. I feel like I want to set some sort of an example. They have heard me talk too often and more than I should have about wanting to be healthier and lose weight ... to the point where I didn't realize they were soaking it all in and they started stepping on the scale - for fun. I had to change the way I looked at everything - and explain to the boys that little kids do not ever need to lose weight. Their only job is to grow big and strong and eat and be healthy.

I want to show these boys that Mommy isn't all talk. That Mommy can actually do this. I pre-registered for both the Super and the Spartan for 2014. Just waiting on the details to get posted for the initial Sprint and I will pre-register for that one as well. I'm 3 weeks into C25K (even if my Facebook log reads week 1 - started over when I got a new phone last weekend ... had to have my stats people!) and I think if I push hard enough over the next year, I might actually be able to do this.

Even if just once. To say that I did it. So here we go.

Oh, and if my husband happens to mention that he randomly got some emails that he was also pre-registered for these races? Y'all know nothing.
Posted by Liza at 4:23 PM