Getting over the stone wall of death

I think I figured out why I fell off the workout wagon. The running kills me. Until last week, I had been running for about 5 weeks (3x a week) and hating every last second of it. I was doing it, but it wasn't getting easier. All I could think about was getting the workout over with ... how many minutes were left. No matter how I tried, I could not get in the zone so to speak.

As crappy as I have felt this week though, doing that core workout yesterday that I posted about on Facebook, wasn't at all bad. It was hard, yes. But I got into it. And I loved it even more that I did it in my living room and didn't even need to leave the house.

This morning I walked the boys to school, popped in my ear phones and started with a 20 minute brisk walk, followed by a plank in my yard before I went back inside. I finally broke 3 minutes.
3 minutes 6 seconds by the stop watch to be exact.

I thought I could get through the entire ABC, 123 workout from The F Word's Fit Squad session ... but I realized I was missing a few things. Like an evil wheel. So I started with a portion from the workout. 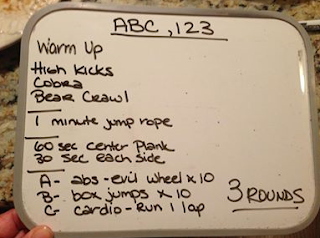 OK you got me, it was more like a 36 second plank and then my abs gave out. And though I tried, I couldn't even side plank today. I switched over to the core challenge and did away with the push ups and center/side planks, leaving me with:

After that, I went back to the ABC,123 workout and searched for the spot the kids last left the jump rope but couldn't find it. I remembered I had my Hoopnotica hula hoop I brought home from LA and grabbed it from the basement. I rocked out to some Britney Spears and Katy Perry, managing to hoop for 5 minutes 57 seconds - which was huge. When I brought that thing home I could barely hoop a minute at a time before sticking it back in the basement and giving up. I SO could have beat 6 minutes but the dog was barking at the door and I lost my concentration.

I thought I would end the workout with the box jumps from Fit Squad. The ones that I am afraid of because my knees are not... awesome shall we say. No boxes. OK, I was making this work. My uneven stone wall in front of my house would totally do, right? Right. I cranked the music up so I could be in the zone.

And I jumped up.

And I did it! And then? I promptly lost my balance and fell over backwards on my back. This photo right here? The Stone Wall of Death. Look at the height on that thing. 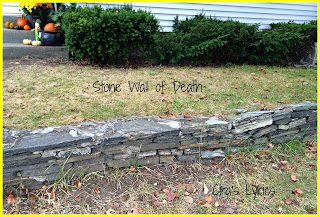 I picked myself up, sure my neighbors were watching from their windows, grabbed my phone and headed in. I debated on ending the workout with that, but I felt like I needed to do one more thing. I grabbed the hoop and stopwatch. I got back in the zone with some Amy Winehouse and some Lemonade Mouth (don't judge) and not only did I break 6 minutes this time, I hit 8 minutes 58 seconds before that hoop dropped. So close to 9.

All in all not a bad morning. I am way more motivated to mix things up like this, then run around the track. That bores the crap out of me. I'm not giving up running. I know that I need to do that as well if I am going to do the Spartans. Maybe its more of this sort of thing, with some running thrown in here and there, that is what will finally do it for me.

Grabbed a coffee and after that, it's back to all water (and apple cinnamon water) all day like yesterday. Now to plan tomorrow's workout.