Because I needed more chaos in my life, we got a dog 16 months ago. A tiny adorable puppy that we all loved from the moment he came home. We had wanted to fill that space that Merlin left a few years before when he passed away, but knew the boys needed to be older first. 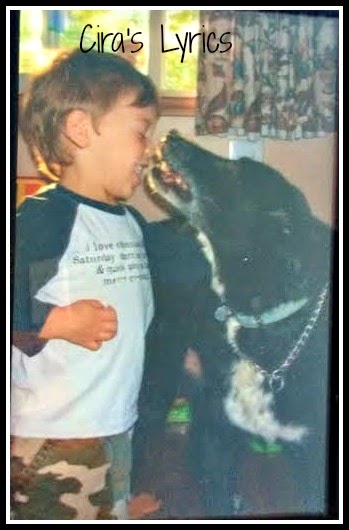 I thought they were old enough. I thought 3 boys, a dog and a fenced in backyard would be the perfect combination. I pictured them all running around for hours in the yard. In the beginning, it was all adorable. 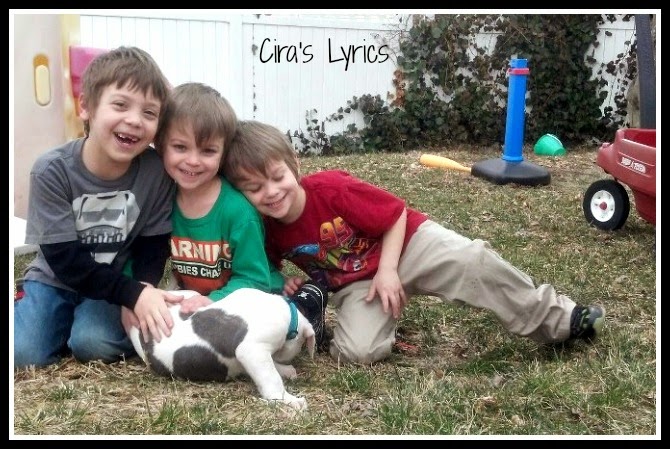 And then he grew to the size of a small horse. A most of the time dirty one (no matter how many baths he got). The boys could no longer hold his leash. He became stronger than they were in what seemed like an instant. 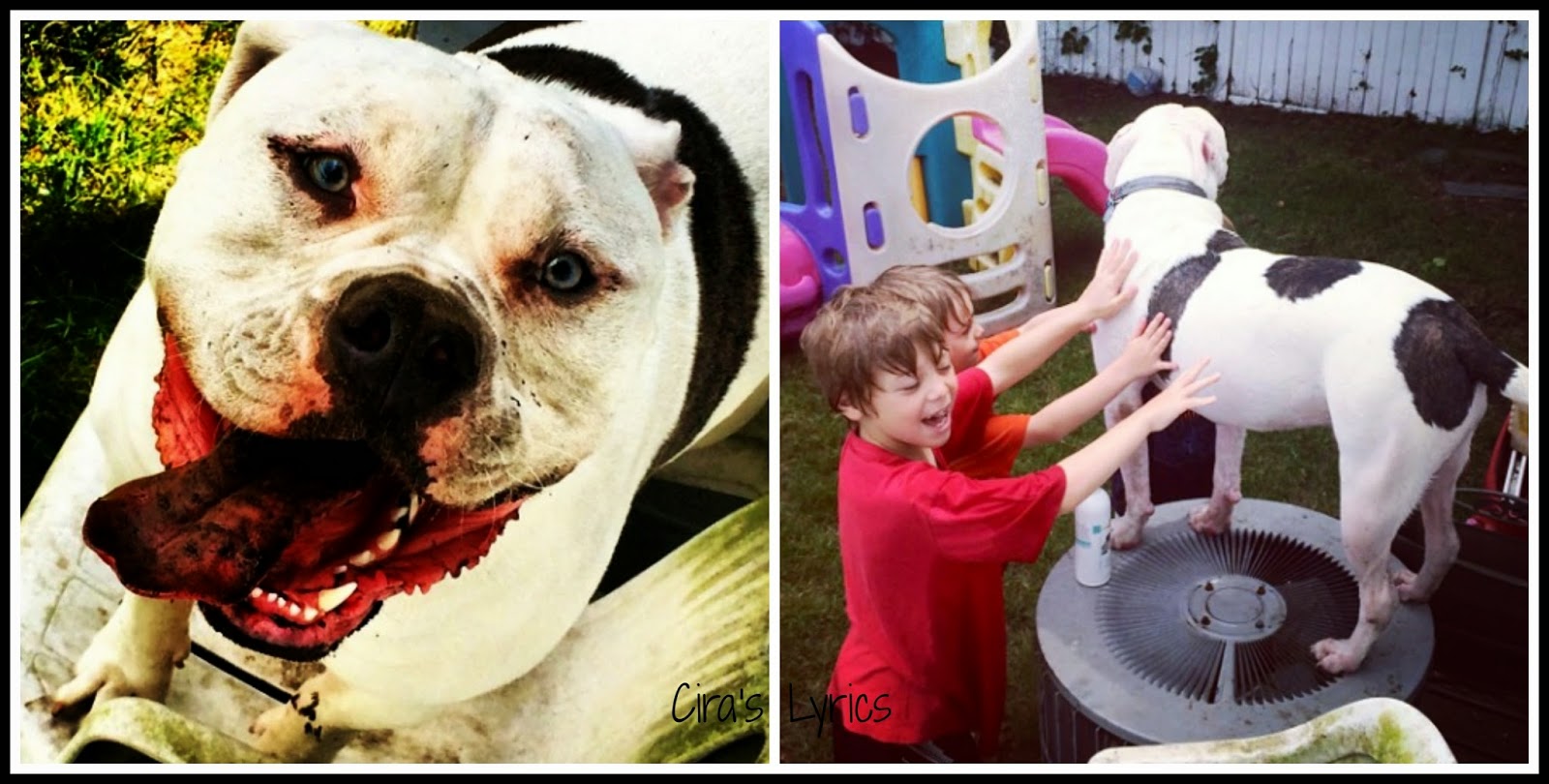 I knew he would be giant, but I didn't think it would be a problem. The problem was, I had boys who would rather spend hours cuddling with the dog and being low key - which sometimes he loves - but in reality he needs so much more.

When he started destroying the house, I blamed it on him being so young. Surely he needed training, obedience school, heck let's ship him off for a week of intensive training. Only over the last month or so have I realized that that isn't the problem at all. As he started choosing the boys most precious stuffed animals from their beds that he had never before touched, eating things from the inside of my pocketbook, getting into all the things that are actually most important ... I realized what it really was.

And it's our fault.

I spend half my day chasing him down to retrieve whatever he is eating. Chew toys? With the exception of those super hard rubber balls, he takes them apart in minutes. (Even the ones we bought that said extra tough and practically indestructible. Ha!) No match for Captain America. No matter how much we spend, a typical toy lasts less than an hour from the time of purchase in the house with him. 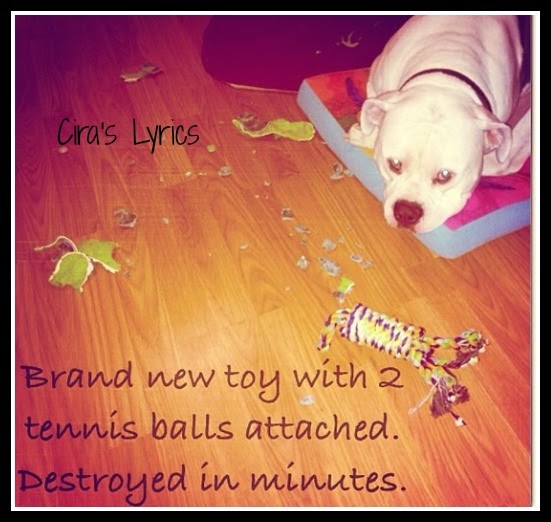 He's an amazing dog with the boys though. How many dogs do you see that let 3 boys constantly lie on top of him whenever they feel like. 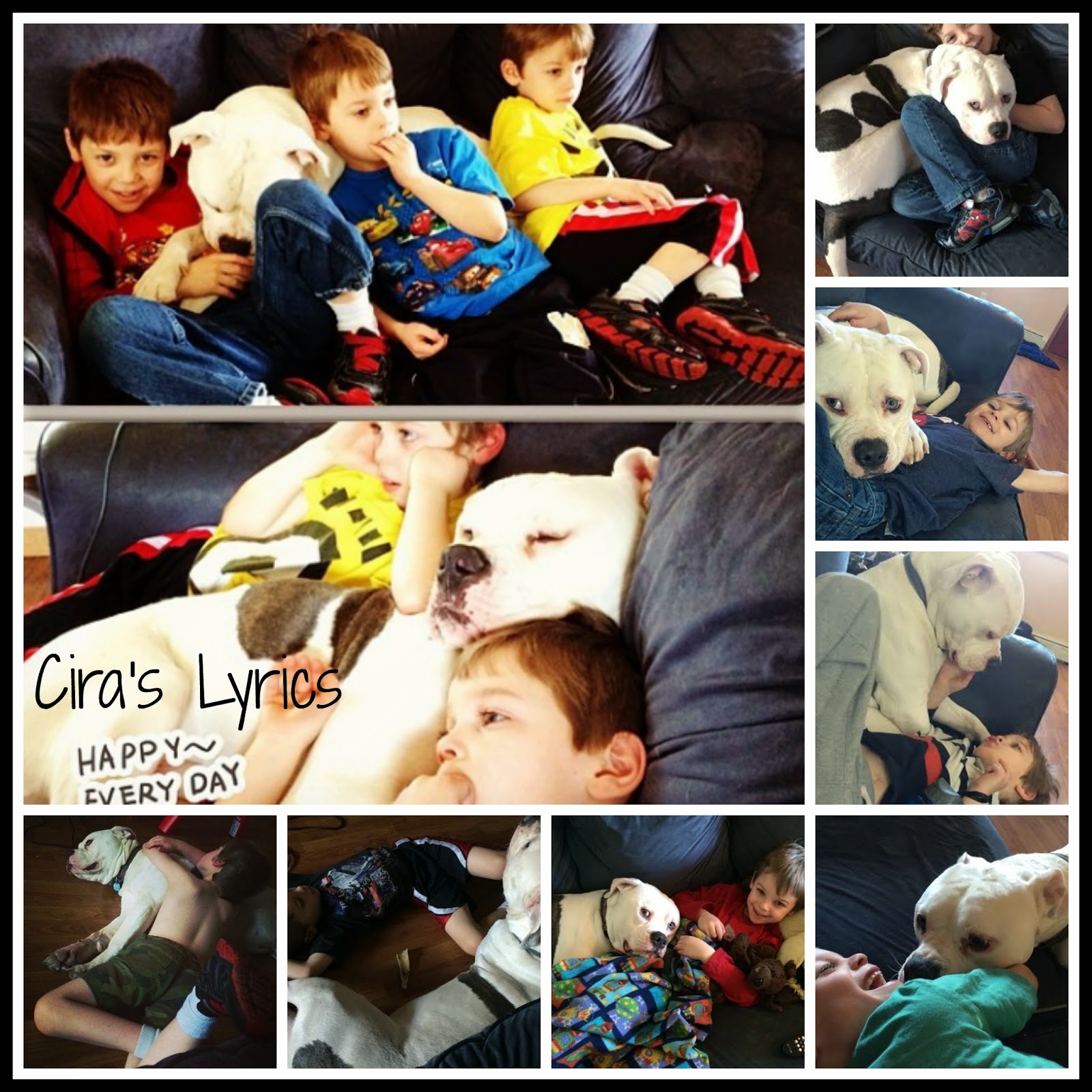 He's never once growled at them - or any of us. It's tough to have people over though, because he gets so excited all he wants to do is jump on you and lick you to death. For hours.

We have been doing him a disservice though ... and I finally see it. For weeks on end I have been lecturing the boys. Go play with him. Throw him a ball. Take him out in the yard. They don't want to hear it. When I do force them all out, I watch the three of them stand on top of the play structure where he can't get to them. It's not fair. I spend my days yelling about this dog we were supposed to love.

Yesterday I hit the breaking point. It hadn't even been 24 hours since I had given a huge lecture to the kids - that they need to play outside WITH the dog for at least a half hour a day (which isn't anywhere near enough but I figured it would be a start) or I would be finding him a new family. They promised they would play with him - until the next day when they decided they didn't want to go in the yard.

Then he got to Mr. Monkey again - and ran right out the back door with him. I spent several minutes chasing him around the yard as he chewed him and it broke my heart a little. He knew it was important to one of the boys and that someone would have to come after him. Al and I had a talk when he got home. We took the boys and the dog for a long walk together. When we got back home, we sat them all down.

There are no more second chances. This isn't about not loving Captain America. This is about doing what is right - and fair - for him. Because he needs so much more. The boys have one week to show us a few things. To play outside with him every.single.day. To throw him a ball. To spend more time with him instead of closing him out of a bedroom so they can play a game without him. If they can do these things for an entire week Captain America can continue to live with us. If they can't? We will be finding him a new home with a family who Can spend more time with him.

And there will be no more pets for a good long while. Not until everyone is older. And IF we get another dog someday, it won't be a puppy. Maybe an older dog.

I thought back to how easy it was with Merlin. The Big Guy was 3 when we had to put him down, the twins about a year and a half old. There was no chaos with Merlin. He would follow them around, cuddle with and lick them ... lie down in the backyard while they played. He was so old by the time the boys were born. He was great with them - but if I'm honest with myself, I have to remember what it was like in the years following Al and I picking him out from the pound. Disaster after disaster. He had so much energy and he destroyed everything. The years passing by sort of make you forget that.

The boys cried and said they didn't want to give him to a new family. But then a few minutes later, the Doodle Bop asked if we could go say goodbye before we drop him off to a new family. The Bunny Bee asked if he could take some extra photos to remember him by.

It kind of sounded like they were throwing in the towel.

This morning though, they took Captain out in the yard on their own and have been playing for over an hour without incident. They may not really be playing With him, but at least they took him out. And they are filling his water bowl. I don't know if it will last past today, but I guess time will tell. There will be no more lectures or reminders. The kids know that. As much as I want things to work out - and I don't want to take this dog away from the boys - I'm not sure how this is going to turn out. Deep down, I have a feeling this will only last a day or so. A week from now we may very well be looking for a new family for Cappy.

And it feels terrible even though I know it would be the best thing for him.
Posted by Liza at 1:24 PM