My boys have gotten tons of press this summer.

Front page of the Journal Bulletin.  Twice!  They even made the Cranston Herald too.

And just a few days ago?  They joined the big leagues.  Immortalized on TV.

Not only did Al get on camera eating a wiener (I know... they must have had a camera set up somewhere because when he stopped in to eat no one was actively filming), but there was a quick shot of the Big Guy sitting with him.  Too quick to capture in photos, but he is there.  The twins get showed a couple times, once eating also... and there is a background shot of all of us together.

We were on vacation in New Hampshire Wednesday night when the episode aired and the hotel we stayed at did not carry the station.  (So glad we dvr'd ahead of time.)  Al was practically famous on Twitter and Facebook after the show.  Shout out to Becca for sending us a screen shot she took that night.

I have joked that I need to get the boys (all four of them) their own IMDB pages because clearly I will be inundated with acting and appearance requests soon. 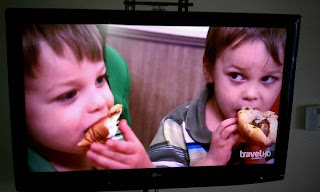 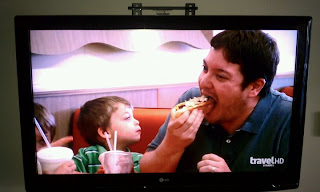 Destined for stardom.  Clearly.
Posted by Liza at 9:52 AM