Seagulls might eat me (and nearly getting banned from the beach)

I loved just about every last minute of today.

The boys and I were out the door just after 8am, hitting the road for the beach.  Sand Hill Cove...Wheeler... you know the one.  Trying it out again.  Windows down, on the highway, blasting the music because the boys wanted it louder...and hysterical laughter.  Having made it just as they opened, we even landed a front row parking spot which meant prime real estate on the beach as well.  I looked for the water line on the sand and set up shop just behind it for when the tide came in. 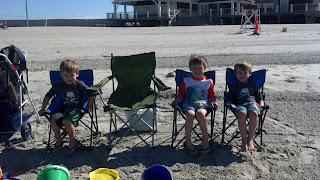 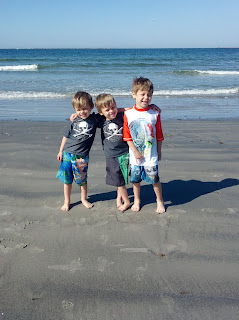 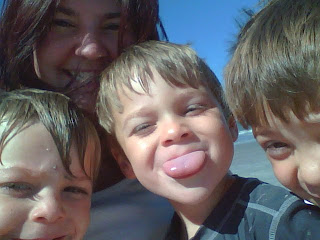 I don't think they heard a thing I said.  I had to pull the twins out of the water three times. 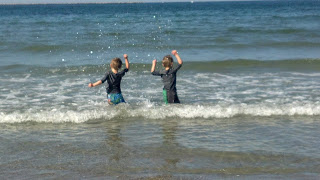 Once the lifeguards were all in place the wind really started to blow and lets just say it was suddenly freezing.  Each kid took a turn having me wrap him up in my giant towel like this. 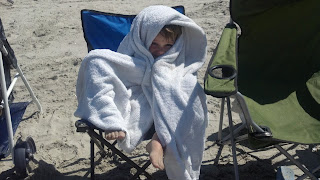 After that they were in and out of the water...but more out.  Leaving them time to do all the things they have never actually done at the beach before.  Like build a sand castle village, have Mommy make them into Mermen and marvel at the ships going by. 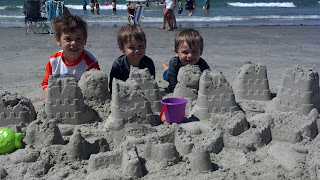 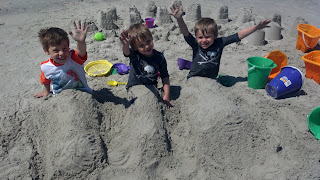 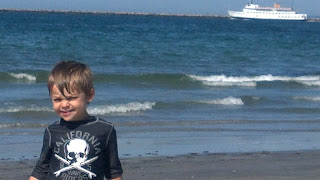 Then it happened.  They decided they wanted to be in the water but were too cold.  The Big Guy got the bright idea to fill a bucket with water and sit in it.  The twins followed suit.  It looked like this. 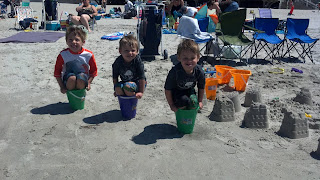 Which YOU KNOW turned into the boys talking about the potty (loudly) and slowly tipping the buckets so water came out - like pee.  So embarassing.  As I tried to get them to cut the crap (well that was a poor choice of words Haha!), I heard another nearby parent tell her kid not to even think about doing that.

And THEN there was the time the Doodle Bop dropped a small piece of food that the seagulls tried to get.  Instead of throwing it out, Mommy had the bright idea to place it on top of a castle to see what would happen.

Um... you know what happens?  You get about 50 seagulls swooping down just inches over your head fighting for the one tiny piece of Pirate's Booty while the boys laugh like crazy and everyone else on the beach is loudly wondering what in the hell is going on with the seagulls.  Guys, I nearly got us banned from the kid beach!  (No photos of that unfortunately.  I was too worried about getting pooped on ... or eaten.)

This was the boys trying to protect their castles as the tide came in. 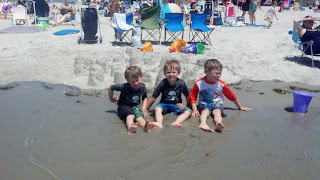 I don't think I need to tell you it didn't work.  Every last castle ended up eaten by the water but the boys had a blast.  After we had moved our things back as far as we could and the tide was still coming in, we called it a day and headed home.

Tonight after dinner we surprised the boys by letting them stay up past bedtime to watch a movie they wanted, then took them out for a 'ride'.  To Sundaes for ice cream after dark.  Crossing one off the summer list. 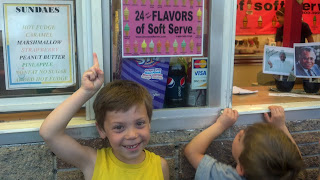 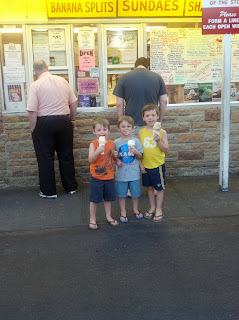 Two hours late but the boys are in bed and I am pretty sure that I win at today.

...Except for the part where we were sitting in a parking lot tonight when Al took a movie back to the Red Box and the boys asked what eye patches are for.  I replied 'to help eyes heal' and for some reason resisted the urge to say something like or cover missing eyes and make a smart pirate remark followed by an Arrrggghhhh!  As I'm debating on whether to add that part I hear the twins say really loudly 'See that guy over there?  He has an EYE PATCH!' As I turn to quiet them I see the man in the very next parking spot - with an eye patch - and yes ALL of our windows were down.

Well wait, I didn't say the missing eye/pirate part so I still win at today.