So OK wow we have been busy.  I know it seems like I disappeared, but I promise you I am still here.

Last week my husband's great aunt passed away, which I will write about another time.  And since then the boys and I have been flying through the summer list...and just like that its been an entire week.  Every single night I sat down to write.  I just didn't manage to finish a complete post.  Today is catch up day and I'm starting with the boys turning 5.

Monday night was the last time I could tease the twins that I was banning them from the big 5.  They would have to stay four forever! (Which was a joke that started with the Big Guy when he was turning 5.)  The boys found it hilarious and begged me to ban them too.  After they were asleep we snuck in and put up signs and streamers all over their room.  I hope they never tire of that tradition.

Sitting in the living room in the morning they boys asked when they were 'officially' 5.  I looked at the clock and it happened to be 8:02am.  I told the Bunny Bee he turned 5 one minute ago and the Doodle Bop was still 4...only for one more minute.  Which they thought was so funny of course.  Al ran up the stairs and told them he was going to stop time just as it hit 8:03am but it was too late, the Doodle Bop was now 5 as well.

I tried to pack the day with as many fun things as possible since the boys party is not until Saturday.  After Al went to work, the boys and I met Becca and B at Wright's Dairy Farm for the morning.  We came back to find the first butterfly had come out of the chrysalis.  We spent the afternoon at the Budlong Pool swimming.  Back at home we were able to watch the second butterfly 'be born' and the twins found it amazing they were sharing a birthday with them.

For dinner that night the boys chose Chelo's Waterfront. 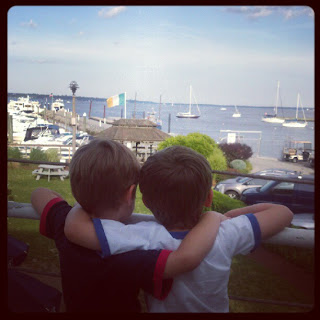 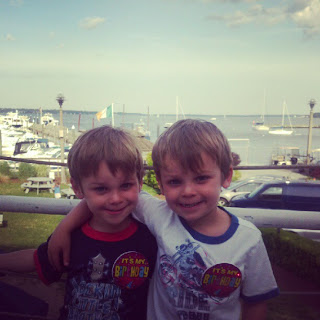 It was a beautiful night and after dinner the wait staff came and sang Happy Birthday to the twins. Cutest thing ever. I watched their eyes get wide at they heard the clapping get closer, then they were beyond shy turning in to Al and I. But I could tell they loved every second of it too. 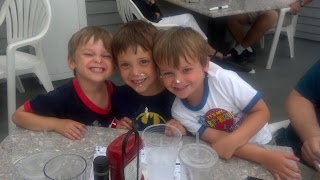 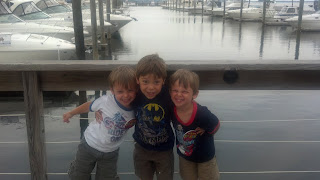 We stopped by my parents house to get the pinata for Saturday my mom made and then I sent the boys out into the yard (after 8pm) at home so Al and I could get the cake and presents ready.  Singing Happy Birthday was one of the best things I have ever seen in my entire life.  I was so choked up I could barely sing.  Before we lit the two sets of candles the Bunny Bee put his arm around the Doodle Bop and said that we could sing to him first, because he always goes first...so it was the Doodle Bop's turn.  I had always done it by age (the whole two minutes) and had never given it a thought.  Watching how excited that made the Doodle Bop was so sweet.

So Al lit the candles and as we sang the twins swayed back and forth with the biggest smiles, sang as well and put their arms around each other at one point.  The photos are so blurry because I was snapping as fast as I could and they were not sitting still, but I feel like you can see how happy they were.  I will remember that for the rest of my life. 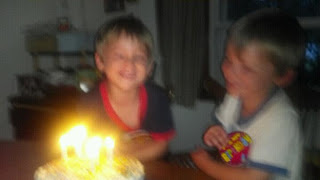 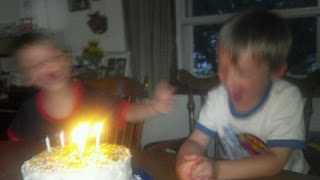 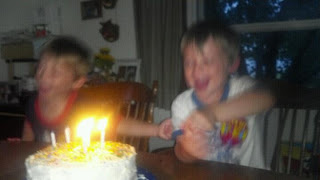 Those kids didn't even want their cake, just the presents.  Since it was the big 5 they opened the mp3 players they had been waiting for (though somehow didn't realize they were actually getting).  Adorable how excited they were.  They told us it was the best birthday ever.  And suddenly they looked all too grown up to me. 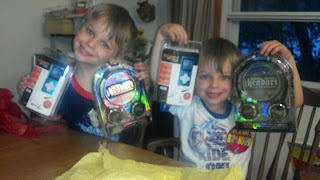 The night ended after we yanked them all out of bed in just shirts and super hero undies and let them stand outside in the driveway clutching their stuffed animals watching fireworks. Which was beyond huge...because just 2 hours before they were still screaming and crying over the noise. This time they were cheering.


Five. My babies are Five. And I don't know where the time is going. 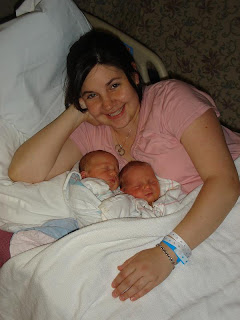 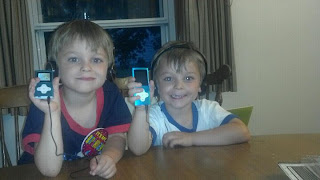