This week has been insanely busy.  Drive-in with the kids Tuesday night.  Oh and lets not forget the emergency trip to the pediatrician earlier that afternoon when the Doodle Bop accidentally sliced above the Big Guy's eye with paper (that we though sliced his eye as well).  But it didn't. Score one more for the Doodle Bop.  Crushing fingers, knocking out teeth, and now?  Paper to eyes. 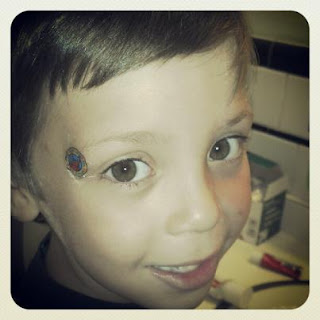 Looks good now that it's got the spidey band aid... but when it happened?  That eye was swollen shut.﻿

Oooh and there is that time I found two kids playing in the sink.  Because they were bored. 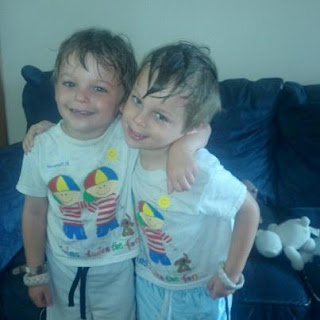 Bill Harley concert with the kids Wednesday night.  A friend got the boys into his music and it was such a flashback because I grew up listening to him.  Not only did he come to all the local elementary schools, my mom took me to one of his concerts back in the day.  After the concert he mentioned he would stick around a little and though we were way up the hill and over to the side I grabbed the boys hands and we ran like something was on fire.  All my prior celebrity stalking is paying off, can you tell? 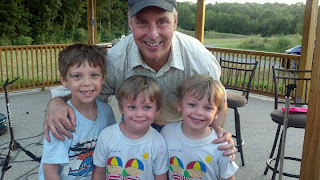 We were the first in line.  I wanted to tell him what a big part of my childhood he was and how cool it was to take my kids to see him... but it was so crazy I only managed to get a photo of them before we stepped aside for the next person.

Thursday morning I was finally at the doctor's office.  For weeks now I have barely been able to hear out of one of my ears and it is driving me crazy.  Lets just say we were in there waiting too long and the boys went nuts.  Bones and muscles. 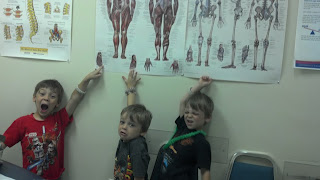 This one below is the Doodle Bop saying Poop! This is where POOP COMES OUT!  God help me. 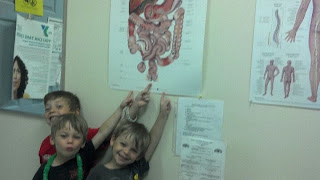 Once I was finally seen they jumped on each other like they were MMA fighting as I tried to listen to the doctor tell me I had fluid in my ear ... but you know, I could barely hear anyway.

I promised the boys this entire week that I would take them to the beach today and they could use their brand new boogie boards from Julie.  This morning I published my hair chalking post on Buy-Her, packed up the kids and headed out the door nearly 45 minutes behind my usual schedule.  I was kind of amazed that we made it to the beach in just over a half hour.  Where were all the cars?

We unloaded the car and trekked down the beach.  That is when the smell hit me.  Oh my gah.  Just ew.  Then I notice the water. 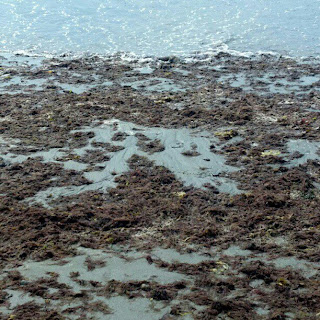 I texted Al to ask if there was a red tide warning...but there wasn't.  My friend found something about stinky seaweed invading the beaches and I have to say the description is pretty accurate.  The boys were devastated when I had to tell them they were NOT getting in that water.  Truth be told there was only a handful of people braving the water.  Mostly everyone else just sat around complaining about the stink.  We didn't even last an hour and a half in the sand.  While the boys can spend hours building sand castles they were too upset at finally having boogie boards and not being able to use them. This is pretty much all they did (when they weren't complaining). 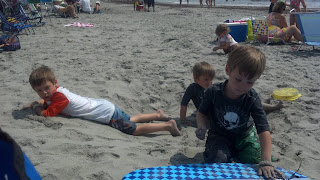 The beach is my serenity.  I don't know how else to explain it.  I totally get that a ruined beach day is Nothing on the scheme of things... and its not like we won't be back again at the end of next week.  But I'm starting to fall apart over leaving on Monday and going on this trip (that I'm sure will be amazing but right now my nerves are getting the best of me)... and sitting on that stinky beach watching the boys flip out?  I wanted to cry my eyes out.

Its hard to find perspective on things when the place you go to Find your perspective is a mess.  I took my cranky kids home and showered them up, then we took a trip to McDonald's for lunch as a treat.  An employee came over to ask if I needed a high chair for the Doodle Bop (and only the Doodle Bop).  Uh...no thanks I stuttered.  I wanted to scream Seriously?  He's 5!  And I couldn't help but wonder how even if he seemed small enough, what about his twin brother sitting next to him.  Crazy funny the more I think about it.

I am now hiding out in my room with a Starbucks, my laptop and the ceiling fan on...hoping that the boys can occupy themselves for awhile because I feel like I am on my last nerve with them.  If I hear one more kid yell 'Mom!  Mommy!!!' one more time... I don't even know.

Which is funny too because come Monday I know I will find it hard to leave them.

And now it has gotten way too quiet, which means they are surely up to something.  Do I want to know?  I'm not so sure.  Time to go check up on them I suppose.
Posted by Liza at 2:49 PM