This morning was Kindergarten registration for the Bunny Bee and the Doodle Bop.

They were all smiles and poses this morning after they got dressed. 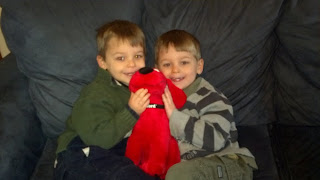 When it was time to go, we walked around the corner to the school and they talked the whole entire way.  We walked right in and then it happened.  They lost their little voices.  If anyone even looked at them?  They averted their eyes and slowly turned their heads in a different direction.  Oh yeah, and they declined snacks which included chocolate.munchkins and apple juice.
I said chocolate munchkins and apple juice people!
Upon noticing one of their old teachers in the building they perked up and spoke with her for a minute, but then decided they would be mute again.  Just when I thought they had warmed up.
Not only would they not seperate from me, but they each held onto a leg so tightly I was waddling.  When it was time for me to sit with the school nurse and go over paperwork, they tagged along with me instead of going to check out the class.  These guys wouldn't even sit in the chairs that were next to me.  They just each gripped on to my arms.
As I started the paperwork the reading teacher came over and was able to show them some bookbags the kindergartners were being given and suddenly the boys were interested.  They were so excited by the new book inside that even though they didn't crack a smile, they were suddenly willing to go check the other things out and off they went.
When I finished, I was so happy to find them sitting at a table with other children coloring after eating a snack after all.  The best part?  The Bunny Bee was asked if he liked to color and he nodded seriously and said something to the effect of Yeah.  I'm pretty good at it.  I stay in the lines.
That kid held up the paper and pointed to some tiny spots and said Except these little pieces.  I don't bother with them.
And my child was back.
On the way out we took a photo and this is how the boys decided they would pose. 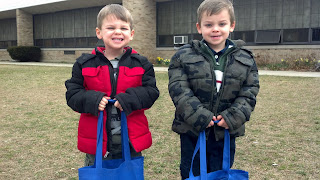 These two are in love with the new books they got! 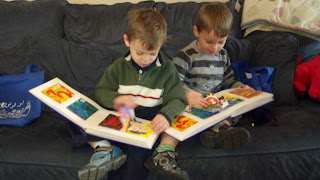 And because everything always tends to happen at once with the kids... we were cutting it too close to pick up the Big Guy from school so Al went and got him.  He took him to his office.  One of the girls gave the Big Guy a Starburst candy.  No sooner were they in the parkinglot to go to lunch when the Big Guy lost a bottom tooth that he didn't even know was loose. 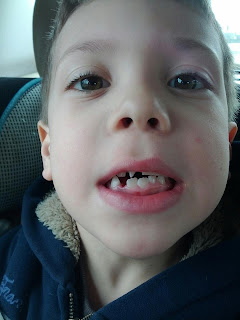 Actually a great thing it happened like that.  After losing the first three teeth to injury he was terrified to lose another... no matter how many times we told him when a tooth is actually ready it won't hurt.  He said he was eating the candy and his tooth felt all tickly... and then he pulled it out.
This kid is going to pick my lottery numbers next.  Do you know what book he brought home from library today?  One about a dog having a loose tooth.
Posted by Liza at 8:31 PM