Struggling to still be Thankful

Finding it hard to find the good on this Thankful Thursday like I promised. On the way home from the wake last night for my friend's father, my own father called me. My grandfather was not doing well. Having just picked up the boys from my sister in law, they heard everything I said. And listened to me cry.

There was no getting around it. At home I sat the boys down and we had a talk about how Opa would soon be going to Heaven. The twins were really sad, but it was the Big Guy who fell apart. He was begging me to do something to help him stay here longer. It broke my heart that he cried himself to sleep. I barely slept last night. I kept waiting for him to wake back up and need me.

My dad called me first thing this morning to let me know that my grandfather had passed last night. I broke it to the boys as they got up one by one. My cousin called me and we had a long talk. Then it was back to getting the boys out the door to take the Big Guy to school. I almost didn't send him ... given how upset he had been the night before ... but I hoped it would take his mind off things being with his friends. I was thrilled to hear from his teacher that it did.

Today happened to be my day to volunteer in Kindergarten. I was putting packets together for the teacher as I hear the Doodle Bop loudly tell some friends that his Opa died.  In the moment it took me to turn around the Bunny Bee had chimed in and it felt like the entire class was listening. I was mouthing I'm sorry! to their teacher and trying to tell the boys we could talk about it at home. Their teacher was wonderful. She let them talk about it a little and handed me a children's book she happened to have in class to take home for the boys to read. I was so grateful. We have Dog Heaven at home (which is a big favorite), but nothing about someone passing away - and this being a book about a grandparent was just what they needed.

Just as I was starting to feel relaxed, I heard the Doodle Bop tell another friend that they were making his Opa ashes and putting him into little boxes called urns. Not exactly what I'd said. I wasn't sure whether to laugh or cry. I distracted him with something and that was that.

After school we came home and read the book together. The boys had me pull up some photos. This one is their favorite. The thing about this photo right here... I don't know how to feel about it. It is the last photo I have of the boys and my grandparents together. 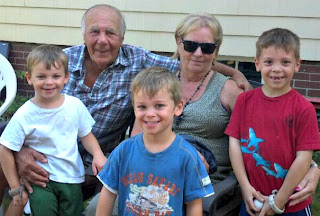 Labor Day weekend. My grandfather seemed totally fine and yet before they left the house I had this nagging feeling I still can not explain. I actually had the thought that I needed a photo because I would never get another one. Which shocked me even then. Of course there will be more photos I told myself. I took the photo, hugged my grandparents and wondered why I even had that thought.

A week or two later my phone rang while I was at the Big Guy's soccer practice. My grandfather had a major heart attack. And you know the rest. He fought for months ... until last night when it was all just too much. The boys did not get to see him again and this is the last photo of them. I still can't completely wrap my head around that one.

It is going to be so hard to say goodbye.