So last year we rang in the new year like this and this.

We would later find out all those sicknesses would be caused by a guinea pig allergy.

I have to say while it was quite a long year with Al working 2 jobs, it was also the start of good things too.  Al got healthy.  My blogging took off pretty quickly.  I still have a long way to go, but 2011 began my trips to NYC (including one solo), getting picked up as a paid writer (holla!!!) at 5 Minutes for Mom and getting to work with Conde Nast on Santa's Hideout.  The Big Guy started Kindergarten and the twins Pre-K at our elementary school of choice.  (Fingers crossed they let us stay again next year.)

Last night I made it clear to the boys New Years Eve would be a do over of last year, to which they reminded me I better get more glow sticks for the dance party.  We made another snack dinner. 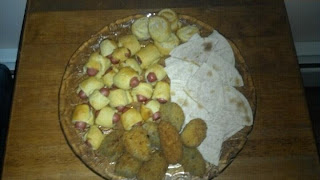 The boys toasted with a special bottle of Apple Cranberry sparkling cider the Doodle Bop picked out from the market. 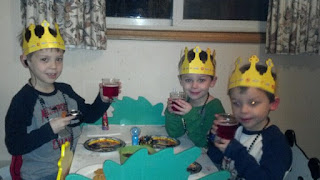 And we had that glow stick dance party/light switch rave as promised.  To 80's music. 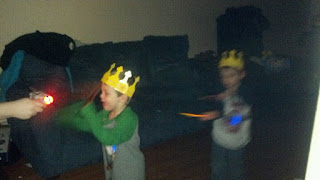 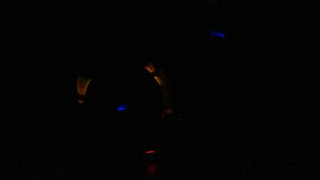 And the boys were out cold well before 8:30pm after the day's excitement of Disney on Ice and our own New Years Eve celebration.  By midnight, I was the only one in the house still awake.  While the last few New Years Eve's have not been that great, I could not shake the feeling that this year, 2012, will be the year that big things finally happen.  Because I am going to make it so.
While we went back and forth on it too long today (combined with Al not really taking me seriously when I first brought it up), we sat the kids down and told them starting next New Years Day we will create our own family tradition.  The Penguin Plunge.  I've spent way too long over the last few months remembering how holidays used to be ... and its time we start making them how we want them to be.
I want my kids to have awesome memories.
Here's to 2012.  Happy New Year my loves!  I am confident this is going to be the best.year.yet.
Posted by Liza at 12:37 PM